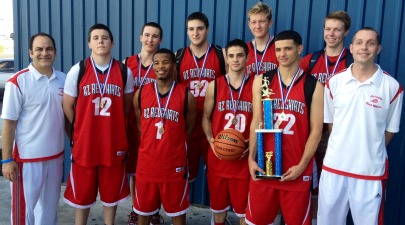 The 2012 aau/club basketball season is now in full swing and the Arizona RedShirtsare off to an excellent start this spring.

This weekend the Redshirts, coached by Brian Fabiano and Jordan Ballard, traveled to Las Vegas, Nevada to take part in the Jam On It - Shoot The Rock Las Vegas tournament.  The Redshirts, comprised of a team of unsigned seniors (2012 prospects), finished undefeated in this weekend's event - with a perfect 8-0 record and winning by an average margin of 25 points in the event.
After a strong showing last spring and summer, this talented group of players returned all but one of their players from last summer, and they look to have picked up right where they left off.
Coach Fabiano told me that the team is really looking good so far this spring.
"With many players already signed, our boys are some of the best 2012 graduates," said Fabiano.  "All of our kids have some kind of offer from a school already, but they are all trying hard to get something better.  If they do not get offered something better over the next two weeks, then most will sign and play somewhere in college next year based on what they have already been offered.  We have had alot of interest in our guys right now."
Fabiano has coached several of the players on this year's team since they were in grade-school - led by the Desert Mountain High School duo of 6-foot-1 senior point guard Alec Savage and 6-foot-7 senior post Jacob Cooper.  Both players have generated loads of college interest late.
"The bottom line is that they are all working for the best education and a full scholarship to play basketball," said Fabiano.
Congratulations to this group on their championship victory, and also for representing the state of Arizona at such a high level.