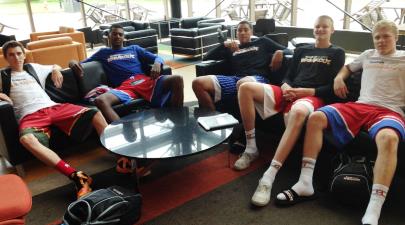 This year's group of five different Arizona prospects that participated in the Reebok Breakout Camp in Philly this week also did their part as well to raise the awareness.  Sunnyslope's 6-foot-10 senior post Michael Humphrey, Westview's 6-foot-9 senior post Andre Adams, Westwind Prep's 6-foot-3 senior guard Tate De Laveaga, Desert Ridge's 6-foot-2 senior guard Hunter Thomas and Mountain Pointe High School's 6-foot-6 senior Chris Davis each did their part to help bring more recruitment opportunities to the state of Arizona.  While Humphrey and Adams would earn all-star camp selections in the event, De Laveaga, Thomas and Davis would hold their own against the camp's best and receive attention from numerous colleges coaches in the event.

There were many of Arizona's best prospects that could have played in this year's camp, and I believe that many others would have risen to the occassion as well.  Imagine if other Arizona 2014 prospects like Zylan Cheatham (Westwind Prep), Payton Dastrup (Mesa Mountain View), Dorian Pickens (Pinnacle), Connor MacDougall (Corona Del Sol), Casey Benson (Corona Del Sol), Isaac Allen (Mesa), Elston Jones (Millennium) and Kodi Justice (Dobson) would have competed in this year's camp.  Arizona would have absolutely blown up.  Forget about just being on the map - Arizona would have become a state flooded with national attention.  Unfortunately for Arizona, club basketball ties and poor advice from those around them continue to hurt Arizona kids.

The Reebok Breakout Camp annually is a camp that is not tied to any club programs or shoe contracts, since Reebok does not have any sponsored teams out West.  This camp is simply an opportunity for players looking to make a name for themselves to do so the right way.  One of the slogans from the camp is "bring your game, not your name."

The 2014 class would have been our state's chance to have the most players from Arizona ever invited to this camp, but it didn't happen as many of the prospects did not express interest in participating.  We may not see a class like the 2014 class in Arizona for many years.  Chaulk it up as another missed opportunity, but the kids that did participate from the state did their part of helping the cause.