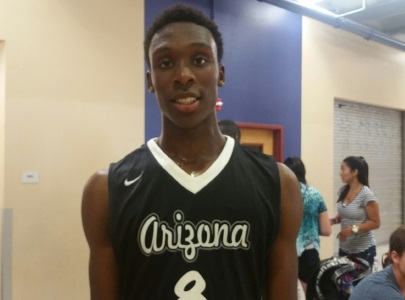 This week, ESPN released their new player rankings for the 2020 class of rising sophomores in America, and several of Arizona's prospects received high rankings nationally.  In fact (3) different prospects received national rankings among the Top 25 players nationally in the country!  This has never been seen in the state of Arizona and proves why many basketball enthusiasts from around the country, including shoe companies, are now looking to set up shop in the state.

Walker is a big-time young talent that has already received rave reviews nationally, since he physically is stronger and more athletic than most players his size and age. He has a nice handle of the basketball and a strong feel for the game, which allows him to make plays off the dribble and finish strong at the rim, while also being able to set up his teammates for scoring opportunities.

Desert Ridge High School's gifted 6-foot-8, 215-pound sophomore post Jason Harris received a huge national ranking by ESPN - checking in as the #10 overall prospect in the class.  Harris was one of the top middle-school prospects to ever enter into the Arizona high school ranks.  Harris entered the Arizona high school ranks as one of the elite overall prospects in the country for his age - ranking as high as #1 player in the country by some national scouting services.

Harris a very long and lengthy athletic forward prospect with loads of potential for the future. He is well beyond his years as a college prospect, as he possesses the physical tools that most kids his age do not have. As he matures physically, this young man should blossom a great deal over time.  He is an excellent athlete that runs the floor extremely well and is an excellent finisher in transition. This young man's potential for the future is limitless - in either basketball or football.  He has superior upside.

Harris is also rated among the top football prospects in the country already as well - already possessing several high-major division-I offers for himself in the sport.  Harris is a rare find in the sport of football, as there are very few prospects with his size, length and with superior athleticism.

Pinnacle High School's gifted 6-foot-1, 165-pound sophomore guard Nico Mannion checks in with a #19 national ranking in the 2020 class by ESPN.  Like Harris, Mannion entered the Arizona high school ranks as one of the most decorated middle-school basketball prospects ever.  After one freshman season in the state, Mannion has received loads of national exposure, scholarship offers and a 12-page layout in Sports Illustrated.

After receiving such a billing by the nation's leader in sports, the state of Arizona is officially on the map nationally, and will receive loads of visitors to the state over the next 2 - 3 years, college coaches, scouts, media and shoe companies look to lure these top-rated athletes.

Recruiting Notes: Hillcrest Prep 6-foot-5, 185-pound junior wing Josh Green also received a #35 national ranking by ESPN for America's 2019 class of college prospects.  Josh Green is among the elite overall prospects in the country, and is one of the nation's hottest prospects currently - playing his best basketball of his young career.  During the spring, Green received double-digit high-major division-I scholarship offers in a short period of time.  Many college programs at the highest level will almost live in the state of Arizona, looking to land Green over the next year.

Three more nationally acclaimed prospects have also recently moved to the state of Arizona as well, and will attend a new prep program - CGM Prep Academy.  The nation's #4 overall prospect in the 2018 class by ESPN, 7-foot-1 junior post Chol Marial, will attend the program and will be the featured prospect in the state of Arizona over the next year.  Marial is an absolute pro prospect for the future and a potential NBA Lottery pick.  Joining Marial at the program will also be Makur Maker and Matur Maker, both high level division-I prospects and brothers of NBA player Thon Maker (Milwaukee Bucks).

The state of Arizona is definitely on the rise and, actually, has risen.