Arizona Prospects Get It Done In Dallas 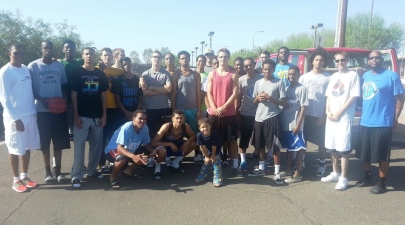 A large number of top-rated Arizona prospects from the 2014, 2015 and 2017 classes left the state of Arizona on Wednesday morning to travel to Dallas, Texas to take part in the Great American Shootout (GASO).  With close to 30 prospects making the trip for (3) different teams from the Arizona Magic club program, there were many top rated performances from thsi year's group.

Thompkins would earn more offers for himself from Cal Poly, UC-Davis and Sam Houston State during the event, and should garner much more recruiting interest this week.  Shreiner looks to be nearing an offer from SMU and Oregon for next fall, and also has an offer on the table from Saint Mary's for 2015.  Adams is picking up strong interest from numerous high-major division-I programs, as ASU and Washington State now look to be hot on his trail.  University of Arizona also looks to be showing strong interest and will watch Adams in Vegas this week.

The Arizona Magic Elite 16U team also performed well in this year's GASO tournament amidst 17 & Under competition that was much stronger physically.  The team was coming off a Consolation Championship berth in last weekend's Pangos Sweet 16.  This group would receive strong play again from Basha HS 6-foot-10 rising junior post Devin Kirby and Gilbert HS 6-foot-6 rising junior forward Chris Bowling.  Kirby would continue his dominant play and even show a nice three-point shooting touch this weekend, while Bowling would play like that of a high-major division-I prospect.  Both prospects are among the state's very best in the 2016 class.  While Kirby will look to generate many high-major offers very soon, he would earn another scholarship offer for himself this weekend from Brown University.

The group would also receive strong performances again from Dysart HS 6-foot-10 rising junior post Malik Ondigo, who has really developed over the past several months of competition.  Ondigo has also generated loads of division-I interest thus far this July.

Each of these (3) teams will travel again this week to conclude the busy recruiting month of July with this week's Fab 48 tournament in Las Vegas, Nevada.

Congratulations to each of these young men on their commitment level to the game and to their basketball futures by traveling to this year's GASO tournament.  They each helped to promote Arizona basketball through their participation in this year's big event that featured more than 300 different club teams.