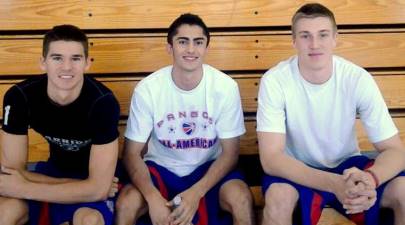 The 11th annual prestigious Pangos All-American Camp took place this past weekend in Los Angeles, CA at Cabrillo High School.  With each of the top scouts and media in the West in attendance for the annual event, as well as many of the nation's top scouts and media, a limited number of prospects from Arizona participated in the event.

Historically, it has been very difficult for many of the top prospects annually to get invites to this camp, but this year was very different as the state of Arizona was well represented in the event.  While the state's top-rated overall prospect currently, Zylan Cheatham, did not receive an invite to this year's camp from Tournament Director Dinos Trigonis, other such top-rated prospects as Mesa Mountain View's Payton Dastrup and Pinnacle's Dorian Pickens were invited to the camp, but chose not to play this past weekend.

Some of Arizona's top prospects in participation this weekend, included Corona Del Sol's Casey Benson, Dane Kuiper and Connor MacDougall (Arizona State commit), Sunnyslope's Michael Humphrey, Westview's Andre Adams, Dobson's Kodi Justice (Arizona State commit) and Gilbert Christian's Roberto Reyes.  Each of these players would raise their recruiting stock this weekend with the scouts and media in attendance, while several of them would gain national attention from the event.

Four of the Arizona prospects, each from Arizona's loaded 2014 class, would be selected for and participate in the camp's Top 60 All-Star Game at the completion of the event.  Casey Benson, Kodi Justice, Michael Humphrey and Andre Adams would each be selected for the game.

Sunnyslope's 6-foot-10 junior post Michael Humphrey would have a coming-out-party in this year's event, as he would gain serious national attention for his play in the event.  Humphrey would block shots, score the basketball in the paint and from the perimeter, run the floor, rebound hard and finish strong around the rim in the event.  As a result, he would receive the vote as the camp's Sleeper of the Event, and also as the player from the camp that should have received a Top 30 All-Star Game selection - after his performance in the Top 60 All-Star game.  Look for Humphrey's college recruitment to now begin to absolutely soar.

Westview High School's athletic 6-foot-9 junior post Andre Adams would also help himself in the event with a nice performance.  Adams, currently rated among the nation's Top 50 prospects in the 2014 class, would show off his length and athleticism on the defensive end in the camp, and also show an improved ability to make shots from the perimeter and finish plays inside the paint.  Adams solidified himself among the top prospects in the West for the 2014 class.

Dobson's 6-foot-4 junior combo-guard Kodi Justice shot the basketball very well, as he usually does, and earned himself a spot in the camp's Top 60 All-Star game with his ability to make shots and makes plays for others.  Justice gave an early verbal commitment to the Arizona State Sun Devils, and while he has not received much national attention since committing, he has remained a very solid all-around prospect.

These Pangos Arizona participants made the state of Arizona very proud this weekend, as a result of their performances.  They put Arizona back on the map, and now look for many more college coaches from around the country start taking notice of the state's top talent.