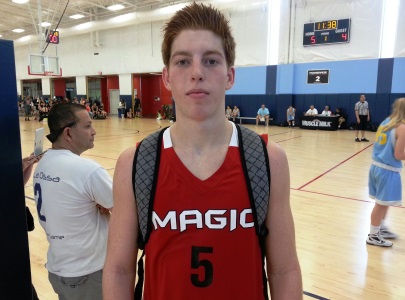 Scottsdale Saguaro High School 2013 graduate Ryan Berg was selected as this year's PacWest Conference Player and Freshman of the Year after leading California Baptist University to a Top 10 national ranking. Berg is the first player in the conference's history to receive such honors as a freshman.
Share
Facebook Twitter LinkedIn WhatsApp Pinterest Email

While I believed this young man was a division-I talent and expressed to numerous college programs that he was worthy of a division-I scholarship, D-I programs passed on him.  Berg would choose to accept a division-II scholarship from Cal Baptist, a member of the PacWest Conference, and his decision has paid off as Berg took the conference by storm this season as a freshman.

Berg would lead Cal Baptist to the regular season championship and a Top 10 national ranking during his freshman season, while also reeling in major individual post-season honors also in the process.

This week, Ryan Berg became the first player in PacWest history to be named player and freshman of the fear in the same season, while also earning a first team All-PacWest honor.

Berg led the #7 nationally ranked California Baptist University Lancers in scoring this season - averaging 17.5 points per/game this season.  Berg led all PacWest freshmen in scoring, and ranked first in the PacWest in free throws (124) and third in three-pointers (73) overall.

Berg is a true testament of how major hard work and belief in yourself can lead to greatness.  This young man is an inspiration to us all and especially to Arizona's future student-athletes.