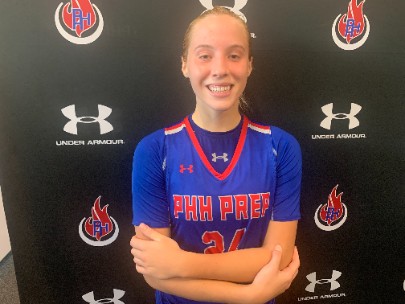 Zipps was also a major sponsor for last year's 22nd Annual Arizona Preps Fall Showcase (October 2020), which was loaded with many of the state's top high school varsity and prep programs.

Our next selections for the award included our selections for Players of the Month (boys and girls) for January. Our staff has selected two more winners of the monthly award, and this new honor goes to two more of the elite performers in the state, and both from the same program - PHH Prep's 6-foot-4 senior guard Kiran Oliver (New Mexico State commit) and PHH Prep's 5-foot-10 senior guard Ally Steadman (Pepperdine signee-pictured).

Kiran Oliver is among the state's most athletically-gifted talents. For the last two seasons, Oliver has proven to be one of the most talented prospects in the West, and he brings his game and intensity every day/night. While leading a very game and talented PHH Prep program this season, Oliver has become a household name on The Grind Session, as he has turned in numerous strong, athletic performances each week. Recently, Oliver gave a nice verbal commitment to New Mexico State, and should be an immediate impact performer at the college program.

Ally Steadman (Pepperdine signee) has had a terrific senior prep season, after another strong summer performance for herself. Steadman, like her PHH Prep teammate Kennedy Basham, made a huge move to transfer from Pinnacle High School to PHH Prep, where she now teams up with many of her club teammates for the PHH Fire, and gives PHH Prep one of the elite girl's prep programs in America. Steadman has been consistent all season long in her play and leadership, and should be an immediate impact performer at Pepperdine next fall. Steadman is a nice role model for Arizona girls prospects, as she is terrific in the classroom and on the basketball court.