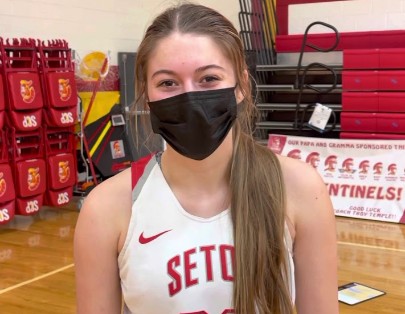 Zipps was also a major sponsor for this year's 22nd Annual Arizona Preps Fall Showcase, which was loaded with many of the state's top high school varsity and prep programs.

Our next selections for the award included our selections for Players of the Month (boys and girls) for February. Our staff has selected two more winners of the monthly award, and this new honor goes to one new award recipient and one repeat recipient of the honor - AZ Compass Prep's 6-foot-4 star senior guard Ty Ty Washington and Seton Catholic High School's 6-foot senior guard/forward Amanda Barcello (BYU signee).

Ty Ty Washington has been on an absolute tear this prep season - leading AZ Compass Prep to an amazing season. This season, Washington has been terrific - proving his value among the nation's elite 2021 prospects. Washington led his team to the Championship in the Pangos All-American Festival, and also led his AZ Compass Prep team a tremendous, undefeated National Championship performance on the Grind Session. Washington would also give a big commitment to Creighton University in November, but has re-opened his college recruitment, and is now one of the hottest prospects in America.

The Barcello family is one of the best basketball family's in the history of the state of Arizona - producing numerous Division-I players for the collegiate ranks. The latest family member to follow the trend is Seton Catholic High School's 6-foot senior guard Amanda Barcello. After helping lead the historic Seton Catholic girl's basketball program to last year's 4A State Championship (2020), Barcello (pictured) returned in her senior season to lead Seton Catholic to another State Championship during the 2021 high school season. Barcello announced her decision to commit to Brigham Young University (BYU) and Head Coach Jeff Judkins and his basketball staff in the fall.