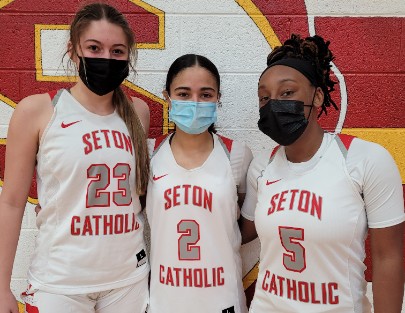 Here are our Top 25 selections currently for girl's high school basketball in the state of Arizona, for big schools and small schools - led by our current #1 overall team, Seton Catholic High School (13-0 - pictured).

With most of the 3A North shutdown, due to Covid precautions, this season is a tricky one to navigate through when it comes to "The Who’s Who" in Arizona girl's high school basketball.

#1- Page.  Page has been at the top for several years. Coach Ryan Whitehorse has done an amazing job building a program that really never misses a beat.  They can graduate and reload year after year. They share the ball well, with only two players averaging double-digits, but don’t be fooled, because any player on this team can give a team problems.  A very free-sharing basketball team.  Page is a favored pick to win it all this year in 3A.

#2- Snowflake.  Snowflake comes out to run hard, play hard and just get after it!  Coach has this program ready to compete at every moment. A very good shooting team, and a team that I’ve personally known to be very defensive-minded.

#3- Pima.  Pretty much (5) players averaging double-digits in scoring is a clear tell that they can and do score buckets.

#4- Holbrook.  Led by senior Mateya Aberle, who is averaging nearly a double-double. Look for Holbrook to pick up steam and make a playoff push.

#5- Thatcher.  The returning 2A State Champs stepped up into 3A, and are playing pretty tough, in spite of having limited use of senior Mia Carter.  Solid fundamental team that’s tough to beat.

#6- Leading Edge Gilbert.  Coach puts in the time with his team to be problems for anyone opposing them.  With multiple ships under their belt and some serious size, this is a top one or two team in the hunt for the trophy.

#7- Ft Thomas.  Coached by one of the most solid coaches and people you’ll ever find, this young team has emerged as a contender. Likely to see a Ft Thomas vs Leading Edge Championship Game this season.  Coach has told me recently that the emergence of freshman Jasmine Oliver as a dominant leader has really helped fire up his young team.

#8-  Winslow.  Coach Jerron Jordan has a solid team, one of the tougher players in the state, let alone small schools, in Kylie Begay.  Kylie gets buckets anywhere she wants, and is especially accurate from deep.

#9- Safford.  Safford has some tough games behind them, and will likely win most games left - setting them up for the playoffs.

#10-  Florence.  Coach Bellemare and company have managed to rack up some wins this season, after graduating all (5) starters just a year ago.  It’s been interesting for Coach this year, as the departing "5" were such a strong core that played in a different gear than most.  Coach Bellemare has got this group grinding out wins, and, even in their losses, they were right in the game.  Picking up a couple splits will put them in a good spot as playoffs approach.

There are a few schools worth mentioning on the outside looking in. Valley Lutheran, Show Low, Gilbert Christian and Valley Lutheran could make something happen if they can finish strong.