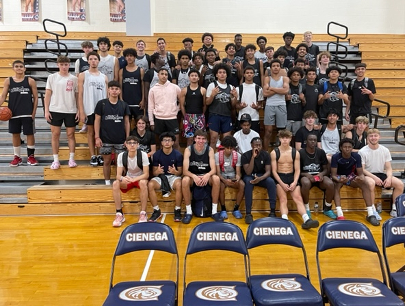 For the first time in (23) years of existence for Arizona Preps, the organization ventured to Tucson, Arizona, to conduct the Arizona Preps Southern Arizona Showcase event. Organized by Southern Arizona Arizona Preps contributor John Millyard, the event featured close to (85) different boys and girls high school student-athletes from the Southern Arizona region, primarily Tucson. The event was an exhibition of Tucson's top talent from many different age groups, and showcased many sleeper prospects that have received very little to no recruitment or exposure to college coaches, scouts and media. This event kick-started the exposure to these student-athletes once again, as Tucson has produced many college prospects over it's rich basketball history.

I was in attendance for the day, along with John Millyard, George Courtney (GC Hoops) , Ethan Piechota (NXTPRO), BBAll Visuals and numerous college coaches as well. As a result of my Arizona Hoop Review NCAA-approved scouting service, the individual top performers from this weekend's event, will also be featured on the Arizona Preps' website and social media outlets, while also being sent out to more than (300) college coaches across the country. This immediate exposure will help to boost the recruitment and exposure of each of the participants to college programs and media outlets.

The energy of the participants from this event was terrific, as each of the players and coaches involved showed excellent enthusiasm throughout the event, and played to win each game, while playing as good teammates and rooting for each other's accomplishments and exploits. It was a breath of fresh air to see this event and the tremendous support that was given to all those involved. Some participants were even interviewed by the local news station at the completion of the event, which was exciting for everyone involved.

While we will release our top individual performers from this weekend's event, actually everyone involved in this event was a true top performer. There was excitement in the air throughout the gymnasium all day, as these student-athletes want and deserve opportunities to be seen and recruited. There is a lot of untapped talent in Southern Arizona, and our staff was very thankful to have the opportunity to showcase these young men and women.