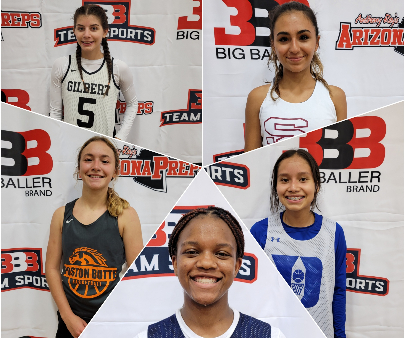 The staff at Arizona Preps has grown tremendously over the past year and a half. Despite the tremendous growth, the mission stays the same in discovering Arizona’s best basketball prospects. This past summer kicked off the Arizona Preps Summer Exposure Circuit with events every weekend in the month of June.

The staff at Arizona Preps organized two high-quality girls' events in the Summer Clash and the Beat the Heat Team Showcase. The 1st Annual Summer Clash drew in some of the top high school girls' basketball programs. The Summer Clash took place in Prescott Valley, which attracted teams from all over the state (North, South, East, and West).

At the Summer Clash, it was a treat to see a mix of 4A - 6A top-rated teams fighting for the tournament championship. Tucson Salpointe Catholic beat Gilbert High School in the Championship. Coach Joe Luevano helped lead his Lady Lancers to a strong summer showing, starting with our Summer Clash event. Despite being edged in the championship game, Coach Colton Walker’s Lady Tigers show a bright future with a young core of nice prospects.

The Beat the Heat Team Showcase was an amazing event hosted at Canyon View Prep in Prescott Valley, AZ. Some teams who caught my attention included Casa Grande Union, Deer Valley, Mayer and Bradshaw Mountain. The Beat the Heat Team Showcase is an indicator that Arizona Preps is expanding its coverage outside the Phoenix area to Northern, Western, Eastern and Southern Arizona.

These events have helped build a database for our staff to market and promote more student-athletes to college coaches around the country. These events also helped create the Arizona Preps Lady Stock Risers Series. Readers (including college coaches) can now read in-depth player analysis and evaluations on some of Arizona’s hidden gems. I am excited to kick off the series in the month of August, so stay tuned.