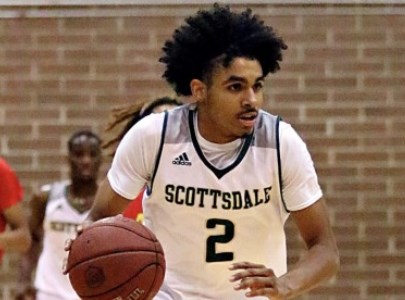 With the recent end to the 2019-2020 ACCAC Junior College basketball season coming to a finish recently, and amid the tragic Corona Virus epidemic (COVID-19), our staff has decided to release our selections for the 2020 Arizona Preps JUCO Player of the Year. After another exciting junior college basketball season, we have decided on the selection of our Player of the Year - Scottsdale Junior College 6-foot-5 sophomore wing Xavier Fuller.

While there were many top individual performers this past season in the ACCAC, no one player had more of an impact on his team's success last season than Scottsdale's Xavier Fuller. Fuller consistently performed at a very high level all season long for Head Coach Mark Bunker and his coaching staff - posting impressive overall numbers on the season. Fuller was selected as the ACCAC Player of the Week numerous times last season, after pouring in 22.7 points and 10.9 rebounds per/game last season. Fuller also shot 48.7% from the field, 83.1% from the free-throw line and 38.9% from three-point distance. These are very impressive numbers for an individual that was the primary scoring option for his team, and had a lot of attempts.

Fuller was also recently named to the NJCAA's All-American Team, as he was selected as a First-Team All-American, an amazing honor. Currently, Fuller is well under recruited, and has offers from Northern Arizona, South Dakota and Miles College. This young man deserves much, much more recruitment for his accomplishments and his ability to perform.

Fuller is a very skilled wing prospect that is able to score inside and out with a nice approach to the game, as he is able to post up smaller players in the post and finish around the basket, while also being able to step outside and make shots from the perimeter. He has a knack for scoring the basketball, but does it with proficiency, not volume shooting - a nice attribute for a scorer. Fuller is able to play as a 2 or 3, as a result of his high basketball IQ and skill level, and can also play much bigger as a stretch 4-man as needed, which creates mis-match problems for opposing teams. He is a good ball handler and passer, making him a very versatile prospect offensively.

The younger brother of former gifted Arizona standout Aaron Fuller, who starred at the University of Iowa and then was a transfer to USC where he started for the Trojans for (3) seasons, Xavier Fuller is another gifted prospect from the Fuller family.

Look for Fuller's recruitment to now take off as more schools continue to look for immediate help next season. For his terrific performance throughout the 2019-2020 junior college season, Xavier Fuller is our selection for the 2020 Arizona Preps JUCO Player of the Year.