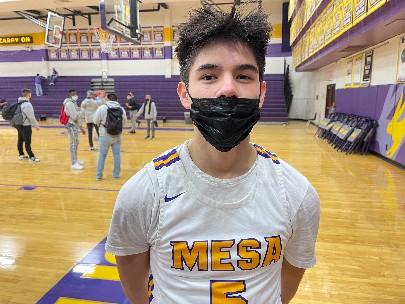 Basketball in Mesa, Arizona is a past-time, like baseball in many other areas. The city of Mesa is filled with basketball enthusiasts, and, as a result, Mesa and Mesa Mountain View High School are two historically elite programs that always make for an intense and exciting match-up. This season, due to the pandemic, the two programs would face off super early in the high school season, but this time void of the large contingent of fans and students. On Friday evening, both programs would compete in a much different looking environment and format, but with the same level of intensity and focus for both programs.

Mesa (2-0) would pull out a big rivalry home win over Mountain View (1-1), behind a nice performance from terrific 5-foot-11 senior floor general Steven Cervantes (Glendale JC commit), who would finish with a team-high 18 points in the win, which included numerous big shots down the stretch.

Arizona Preps caught up with Cervantes after his performance to interview him about the contest, as well as his commitment to Glendale Junior College.