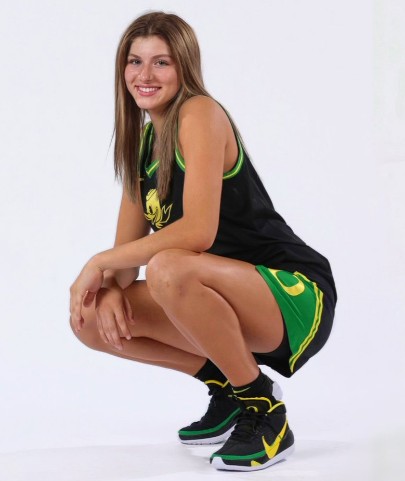 The 2021-2022 high school basketball season was one to remember for many reasons - filled with intrigue and loads of exciting basketball games and top performances from players. While there were many top performers throughout the season, there was no individual girls student-athlete in the state that was more impressive than Valley Vista High School's talented 6-foot senior guard Jennah Isai (University of Oregon signee). Isai is ranked as our top overall girl's individual prospect in the state, regardless of class.

Isai averaged impressive numbers in her final high school season, after an historic high school basketball career for herself. She poured in 24.9 points, 7.9 rebounds, 3 assists, 4.5 steals and 2.2 blocks per/game, while leading her program to a 25-5 overall record this season and a 6A State Championship.

Isai will end her high school basketball career now as one of the elite girl's prospects to ever play in the state of Arizona. Isai is currently rated by ESPN among the elite prospects in America's 2022 Class. She is a different prospect with size, an advanced skillset and an aggressive playing style that simply makes her look different than her opposition. She has an advanced skillset that allows her to play as a guard or forward, and is able to make shots from the standstill position on the court, or off the dribble, on the move. She is a very good shooter of the basketball with excellent range on her shot and a quick release. She is also able to create for herself and others off the dribble at a high rate, and is shifty off the dribble - changing directions nicely and finishing at the basket, around and over defenders. Jennah can play inside and out, which will benefit her nicely over time, especially in the collegiate ranks. She has the game and skillset that suggests that she will become a pro over time, with continued focus and hard work. She is a strong rebounder and also competes hard. She is also a terrific passer, that passes the ball with either hand, and sees the floor well. Her versatility makes her difficult to defend, and helps her makes teammates around her better.

After an historic high school career at Valley Vista High School, and overcoming a lot of obstacles in her young career, the future looks extremely bright for Isai and our staff is looking forward to following her amazing exploits in college and beyond, over time. For all of her efforts this past season, on and off the basketball court, and for her amazing overall performance throughout the season, Jennah Isai is our 2022 Arizona Preps Girls Player of the Year.