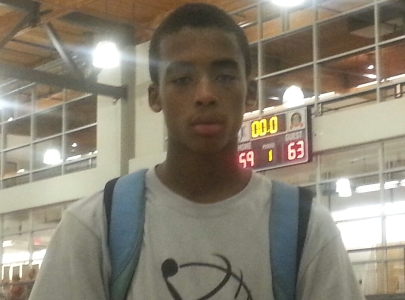 Queen Creek High School's skilled and crafty 5-foot-9 freshman point guard prospect Jaiyer Jinwright is an excellent guard prospect for the future. Jinwright moved to the state of Arizona recently from New Jersey where he was rated among the top young guard prospects in the country.
Share
Facebook Twitter LinkedIn WhatsApp Pinterest Email

As the state’s top pre-season event just before the start to the 2013-2014 high school basketball season, each of these top-rated prospects will be ones to watch this up-and-coming high school season.  Here are my top boys performers from this year’s event, continuing with the 2017 freshman class.  I am also very excited about this young and talented group of prospects . . .

- Kresl plays the game with as much confidence as a young prospect as I have ever seen - similar to a young Matt Carlino (BYU).  Kresl has also never seen a shot that he doesn't like, but he is capable of making them.  Very fun to watch play the game.  Kresl always looks like he is having fun when playing the game.  An excellent scorer of the basketball with unlimited range on his shot and nice consistency already.  An excellent handler and passer, but definitely looks to make the big play rather than the simple pass too often still in his young career.  A solid defender now, but needs to focus more in this area to maximize his potential as a player.  An excellent guard prospect for the future.

- Jinwright is new to the state of Arizona after moving to the state from New Jersey where he ranked among the elite guard prospects in the state while playing for the New England Playaz AAU/club program.  He has already impacted the Arizona basketball scene as a top-rated young prospect for the future.  A very slick and skilled guard prospect that is a floor general that players around him better.  Has a nice knack for scoring the basketball off the dribble, and is a very good finisher in the lane.  A very good defender with excellent quickness and good hands.  Another big-time guard prospect for the future.

- Simmons is another top-rated young prospect from a Simmons family with excellent basketball bloodlines.  This young man will be as good as any of them as he is already a big-time young performer with excellent versatility.  Capable of playing several positions on the floor, Simmons is a nice talent with a strong handle and a good ability to score the basketball.  A good shooter with range.  Has a nice overall feel for the game already.  A good passer.  Very good finisher.  A big-time prospect for the future.

- McRay is a nice guard prospect with the ability to play both guard positions on the floor.  An athletic ball handler and passer with a good ability to score the basketball.  Pushes the ball up the floor.  Good scorer in transition and a very good penetrator and finisher.  Solid passer.  Very good defender with excellent lateral quickness.  Has a bright future.

- Mayberry is a strong floor general point-man that knows how to run a ball club at a young age.  The son of former basketball standout and current NCAA referee Glen Mayberry Sr.  Has an excellent handle of the basketball and sees the floor very well.  Pushes the basketball up the floor.  Makes the open shot on the floor and has good range on his shot.  A good looking young point guard prospect with excellent confidence.

- Kriske is a good guard prospect with a nice ability to shoot the basketball and a nice overall feel for the game.  Good ball handler and passer.  Has the potential to become a very good prospect over time and also one of the top shooting guard prospects in the class.

- Oztrik is very raw offensively, but has good size at a young age.  Still learning how to play with his back to the basket.  He is also is slow physically and needs to work on his speed and agility.  Has excellent work ethic though and should develop over time.