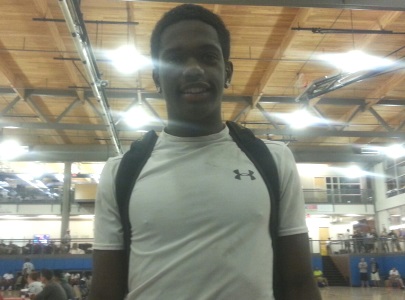 As the state’s top pre-season event just before the start to the 2013-2014 high school basketball season, each of these top-rated prospects will be ones to watch this up-and-coming high school season.  Here are my top boys performers from this year’s event, continuing with the 2015 junior class . . .

- Thompkins is coming off a strong sophomore season and an even stronger performance this spring and summer on the club circuit.  Already possessing a college-ready body at such a young age, Thompkins’ physical size, strength and shooting stroke are glaring attributes for him as such a young prospect.  He is also capable of playing both guard positions on the floor, which makes him a versatile prospect and valuable to his team.  Showed much improved athleticism in this year's event, as he was among the top overall dunkers in the event's Slam Dunk competition.  A big-time scorer and shooter that is beginning to garner a lot of division-I college recruitment.

- Kordsiemon burst onto the recruiting scene after a strong performance in this year's event, earning him considerable praise after his performance.  Kordsiemon has played big-time as of late and finished the fall with several top tournament performances.  He has now emerged as one of the elite prospects in Arizona's 2015 junior class.  An excellent shooter with range, Kordsiemon has as good an overall motor as I have ever seen - playing and competing on all plays. a very good handler and passer, Kordsiemon is a fundamentally sound prospect with a college-ready body.  This young man has the ability to become a very serious division-I prospect - capable of high major division-I recruitment.

- James is another Tucson prospect that will garner serious college recruitment in the near future.  The talented prospect is coming off a strong performance for himself this past spring and summer, and then followed it up with a exceptional performance in this year's Fall Showcase event.  James is a skilled forward prospect that is capable of scoring inside or out effectively.  He runs the floor hard and is very good in transition.  A good ball handler for his size and also a good passer.  While I have not seen much of James, the amount I have seen has been impressive.  Another serious division-I prospect for the high mid-major division-I level or even higher.

- Another Arizona prospect that really benefited from this year’s performance in the Arizona Preps Fall Showcase was Independence High School’s 6-foot-4 junior guard Kaveon Moore.  Moore went from almost obscurity as a college prospect before the event, to now becoming one of the elite prospects in the state’s 2015 class.  Moore’s performance was enough to raise many eyebrows of scouts and media in attendance – raising Moore’s recruiting stock significantly by the end of the event.  Moore got the event started off quickly with a big performance in the first game of the day – exploding for 18 first half points in his game.  Moore’s first half performance included three-pointers, mid-range jumpers, layups in transition and a couple nice dunks.  Quickly, Moore proved that he is a division-I prospect and one of the state’s top sleeper prospects in the 2015 class.

- May has really developed into the top pure-point guard prospect in Arizona's 2015 class.  While he is a big-time scorer as well, May has the ability to handle the basketball and distribute the ball to the open man on the floor at a high rate.  Very quick ball handler that pushes the basketball up the floor.  Has excellent lateral quickness and quick hands defensively.  A very good finisher against bigger defenders, that is also capable of getting into the lane almost at will.  May has the ability to see some serious college recruitment over the next year.

- Reynolds is a skilled combo-forward prospect with good overall offensive skillsets and nice toughness.  A well-coached prospect with very good size on his frame and a passion for the game of basketball.  Able to score inside and out.  He is at his best around the basket area where he is able to overpower most forwards, and has very good footwork, which allows him to score effectively around the paint with a variety of up-and-under moves and jump hooks.  He is also able to score from the perimeter and has a good jump shot with range, which will suit him nicely over time as he is able to make the transition to a small forward over time.  A fundamentally sound prospect now that has a good overall skill level and the body to develop into a serious college prospect.

- A tough, gritty wing prospect with excellent toughness and aggression.  A football star as well that will see serious college recruitment on the football field.  A good scorer with a good mid-range game.  Good scorer and finisher in transition.  Strong finisher in traffic.  An excellent defender with good quickness.  A very active rebounder.  Good ball handler.  A player that helps your team win ball games.  Capable of playing either sport collegiately.  Still needs work on his perimeter jump shot to maximize his potential as a player.

- The son of a D-I coach and a very athletic and physically strong prospect that is capable of playing several positions on the floor.  A strong ball handler and passer that controls the tempo of the game.  A mid-major prospect with a high ceiling.  He is a lock-down defender.  He has a knack for making the hard pass instead of the easy one, at times, but he sees the floor well.  Also an excellent student that carries a 4.0 GPA.

- A strong four-man prospect with good overall toughness as a player.  Bevans does not take plays off and is a double-double threat each night.  A good post player.  Has a knack for the ball and has good physical size and strength for a low major division-I program.  Still needs to work on his conditioning and footwork.  What you see if what you get from this young man.

–  Fritz was the #1 rated forward prospect from the Carribean before entering Westwind Prep.  Very athletic and explosive for his size.  He has a 40’ vertical along with a 7-foot wingspan.  He is an excellent shot blocker and finishes above the rim.  He has a huge upside.  He is still very raw offensively and needs a lot of work, but is improving consistently.  Runs the floor.  Active rebounder.  His high ceiling could project him at a division-I program over time.

- Brian Brooks was literally turning heads at the showcase this year.  Without a doubt, he was one of the most gifted and naturally effective passers at the event.  His quickness was impressive to say the least, and he had the basketball on a string and was never out of control.  Throughout each game he was consistently looking to pass first, but don’t be fooled, he can get his buckets as well.  Whether on the fast break or after breaking down an opponent at the top of the key, Brian was repeatedly making great decisions like a true point guard should.  Some may overlook this kid because of his size, but he plays with heart and intelligence.

- The athletic guard prospect with a very good motor, Hakilimali, is a nice-looking prospect with a strong ability to make plays with good aggression.  A little undersized as a shooting guard prospect, this young man makes up for his lack of size at the position with a excellent athleticism and overall toughness.  He has a good perimeter jump and a good handle and overall feel for the game.  A very good competitor with very good work ethic.  A prospect that could easily become one of the better recruiting targets in the class for a good smaller college program.

- Gousbly had his best performance to date in this year's event - scoring the basketball around the paint and in transition.  He also showed a good ability to score from mid-range.  Left-handed.  A very long and athletic young prospect that is still growing a great deal physically, but has the physical tools, over time, to develop into a serious college prospect.  Very thin physically.  Very athletic with good bounce off the floor.  An active rebounder and shotblocker.  Has very good upside.

- Arqueros is coming off a very good sophomore season for himself and looks to be prepared for a much bigger junior season.  A talented and skilled guard prospect with good toughness.  Arqueros is fundamentally sound, with a good handle of the basketball and a nice ability to make shots for himself.  Has excellent work ethic.  A solid overall guard prospect that now ranks among the better guard prospects in the class.