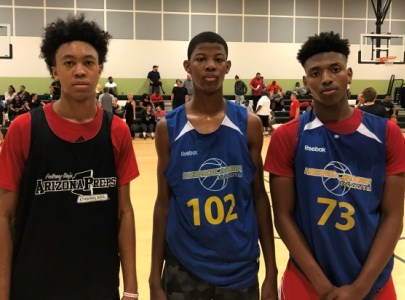 This Saturday I attended Anthony Ray’s 19th annual Arizona Preps Fall Showcase at AZ Compass Prep in Chandler (AZ). There was nearly 90 players who attended the annual event with players from 7th-12th grade.

Here were some of the top performers of the day.

-Lee is a freak athlete with an easily 40 inch vertical leap. He has good length with his quick jump off the ground. As he has got older he is become a better decision maker with the ball, become a better passer and his 3pt shooting has improved. He does take some bad shots from time to time but competes at a high level and is active. He will be one of the top players in 5A all year.

-Hudson is a very good scorer. He can hit from deep plus loves to drive it to the hole. He has a strong body with big arms and carves up space and scores through contact. He is more of a great one on one player then true team player but if you’re looking for a bucket getter, he is your man.

-Fleming is another stronger guard. He has one of the top downhill attackers in the senior class. He is very strong and bounces off of defenders and scores through contact. He pounds the ball a little too much at times but gets to his spots and he is nearly impossible to keep him in front of you. He has nice court vision and competes hard on the defensive end.

-Anyieth has a super high motor and he is very efficient around the paint. He can shoot it out to the 3pt line but needs to be more consistent. The lefty rebounds the ball at a high level and has nice bounce to throw down.

-Adeim is another long lefty. He can shoot it to the 3pt line and moves well laterally to defend some on the wing and near the basket. He is a fluid athlete and takes long strides to get to the rim. He needs to thicken up and become a more consistent shooter.

-Hayes is a quick and shifty combo guard. He can handle it and plays with a nice pace plus he can score it. His handle is tight where he can create a shot for himself almost anytime he wants. He is a little inconsistent as a shooter but will be a nice compliment and third scorer this year for the 2020 bigs of Jason Harris and Shon Robinson.

-Mittun is a scorer from all three levels. He isn’t an above the rim player but can shoot it with consistency from mid-range and to the 3pt line. He can pull-up or go all the way to the cup. He is a sneaky good passer and his handle is fairly tight. He needs to improve his lateral quickness.

-Brown is a quick lead guard with the ability to set the table for his teammates. He has nice speed in the open court and has good strength. The lefty can pull-up from mid-range plus hit the 3pt shot. He needs to become more consistent but he will lead the up and coming Panthers this HS season.

-Bryan is a consistent face-up shooter and a smart offensive player. He doesn’t force the issue and finds his spots to get open and shoot the ball. He can drive it to the hole and score. He isn’t an elite rebounder but he is adequate in his area.

-Hodge-Green is an athletic lead guard. He can make players around him better and he is strong. He uses his speed well on the defensive end and has nice frame/build to be physical. He can hit the deep ball but it is a slower release. Hodge-Green and Fleming will form a nice backcourt duo this season.

-Yarde is another physical guard. He has a great body and good strength to get into the lane and score through contact. He also can hit perimeter shots consistently and is a force on the defensive end. He stays with his man really well and uses his strength to keep them in front of him. He isn’t a high riser but his mind, skill and body get the job done.

-Terry is a long and lean elite passer. He struggles somewhat in tight quarters ball handling but makes plays every game with his incredible court vision. He has a quick release on his jumper with nice range. He rebounds well for position and collects many steals per game with his huge wingspan. The more strength and weight he acquires, the easier everything will be for him.

-Dusell is another long guard. He has arguably the deepest range in the entire class. He isn’t an above the rim player but his ability to change speeds and keep the defense guessing is a huge asset to have. Once he gets into the lane he is a scoring mentality to finish or get fouled. He does get shot happy at times and settles for the long 3 but he has the ability to take over games with his scoring.

-Ruck is a sturdy post player with high skill level with a great body/frame. He fights inside and is a good rebounder. He does need to be more efficient in the paint and get a little tougher finishing through contact. He runs the floor and passes well to be a good teammate.

-Holt is one of the top athletes in the class and arguably a top-10 in all of Arizona. He is a quick twitch player and gets off the floor so fast and has strong legs to propel him. He is a powerful attacker and absorbs contact and scores it through contact. He will have to improve his left hand and perimeter shooting over the next three years to keep expanding his game.