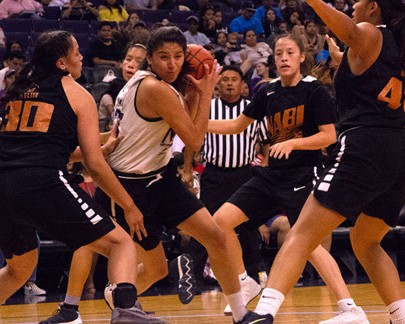 The Copper State is surging with basketball talent over the last few years. There has been a big rise in national powerhouse prep programs, such as Hillcrest Prep, AZ Compass Preps, Dream City Christian, Bella Vista Prep and PHHoenix Prep. We can’t forget how big the sport is in Northern Arizona. 3A & 2A Schools build enormous gyms to accommodate huge crowds. (21) years ago, the state championship between Tuba City and Alchesay High School drew 16,010 in attendance.

Rezball is short for "Reservation Basketball," which is played at an uptempo pace. Most teams will press and trap the entire game. Most Native American High Schools have multiple players that can shoot the ball consistently from deep ranges.

I had the pleasure of coaching against Globe’s legendary guard BJ Burries. BJ was one of the best players to ever come out of Globe High School. I saw his record-breaking performance, when he dropped 68 points in a game. What amazed me the most, was how he had a strong following from his tribe (San Carlos Reservation).

It seemed like the entire tribe would flock to all of his home and away games. It propelled Burries to almost a superhero status in the community.

The next player that I have witnessed is Heritage Academy’s Jose Miguel. Miguel hails from the Ak-Chin Reservation in Maricopa. He is a product of legendary rez coach Thomas Carlyle. Miguel had a strong support and following from the community. The greatest part about Miguel is that he uses his basketball status to be a mentor to the youth in his community by volunteering countless hours to the tribe’s youth group.

Arizona Preps' mission is to cover Arizona’s best players regardless of location in our state. With my relationships and connections, we are pleased to be covering some of the top Native American events in the United States.

The first event we are going to be covering is the Tribe Athletics Spring Showcase on March 27th and 28th at SAGU American Indian College. The next big event will be Tribe Athletics 2nd Annual Native American Jr. Nationals in Las Vegas, June 25-27. The last big event we plan to cover is the Native American Basketball Invitational (NABI) Tournament, which is held in Maricopa, AZ in July.

Jon Yarrow Jr. has done a phenomenal job in running his Native American Circuit, filled with individual player showcases and exclusive tournaments, and drawing in teams from all over the country. The NABI Tournament is probably the biggest tournament in our state, which draws in (64) Boys and (64) Girls Indegenous Teams from across the world.

We definitely want to support the movement, because I myself am of Kanaka Maoli (Native Hawaiian Descent) and our Senior Editor Anthony Ray is of Choctaw Heritage. We are excited to continue to bring the best coverage of the best student-athletes.