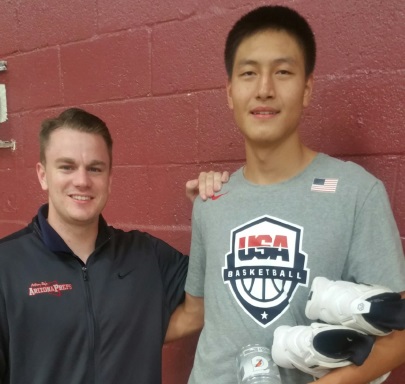 Our Arizona Preps' staff and especially myself is extremely proud to announce that my former assistant for the last (5) years, Chris Buchanan, a graduate of Arcadia High School and a member of Arizona's 2010 recruiting class, has moved on.

Recently, Buchanan was hired by University of Portland head coach Terry Porter and his staff as the Assistant Director of Basketball Operations.  Buchanan has already moved to the campus in Portland, Oregon and is now working for the Portland basketball staff.

Buchanan joined me in 2012 as an intern while attending classes at the University of Arizona.  He was able to earn double-digit credit hours while working for Arizona Preps throughout his college career, and then eventually graduated from the U of A in the spring of 2015 with a Bachelor's Degree.

Buchanan worked very hard daily with me covering Arizona's top-rated basketball talent, and also expanded his coverage to the entire country, as he developed an understanding of the nation's top basketball prospects, which made him very valuable to the college recruiting business.  Buchanan worked tirelessly on stories and evaluations of the nation's top prospects annually, and was seen on the road with me at each evaluation event in the spring and summer for numerous years.

Buchanan is a rare find in this business, as he works tirelessly and has an unquenched passion for scouting the nation's top basketball prospects.  While others would go out and attend parties on the road, Buchanan could always be found in the hotel watching recruiting videos of prospects - remaining focused consistently.

Now it has paid off for Buchanan, and he is a true hero and role model for Arizona's youth.  He started this venture to achieve his goal of being part of a college basketball staff, and he has achieved it.  He worked his way into the business.  Please join me and our staff on congratulating Chris Buchanan on his hard work and achievement.  He definitely deserves it and will be sorely missed by me and our staff.