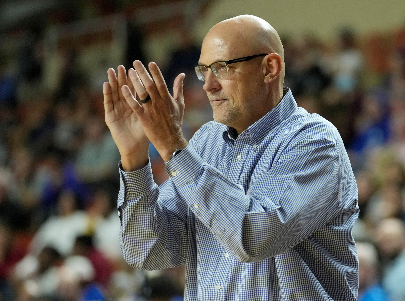 The 2021-2022 high school basketball season was one to remember for many reasons - filled with intrigue and loads of exciting basketball games and top performances from players. For coaches across the state, high school and prep school coaches across the state are to be honored entirely, as we applaud every high school, prep school or national high school coach for their amazing hard work and dedication to Arizona's student-athletes this past season. With that said, our staff's selection for the Arizona Preps Boys Coach of the Year is Mesquite High School Head Coach Shawn Lynch.

Lynch and his coaching staff led Mesquite High School to a terrific high school season in 2022, as Mesquite finished with a very impressive 27-3 overall record on the season, and also won this year's 4A Division State Championship. Mesquite lacked any true size in the post, but were very well coached and led primarily by the strong play of their backcourt of senior guard Nate Calmese and junior guard Cohenj Gonzales. They overcame many odds this season, especially considering going into the state playoffs as a lower seed, and pulling out the state title. Putting together an almost undefeated record on the season in the process, was even more impressive, when you consider that the Wildcats' roster was not imposing or filled with Division-I prospects. Instead, the team competed hard in every game and executed consistently amidst competition. Even while Calmese was out with an injury during the season, the team continued to perform. These are each attributes of a very well coached team.

Lynch has been regarded as one of the elite coaches in the state of Arizona for a very long time. He coached Mesa to the 2003-2004 6A State Championship previously, while successfully leading the Mesa High School program for a long time. Lynch has coached 32 years, starting at Avondale Agua Fria.

Congratulations to Coach Shawn Lynch from our Arizona Preps' staff on this honor, and an amazing season for the Mesquite basketball program.