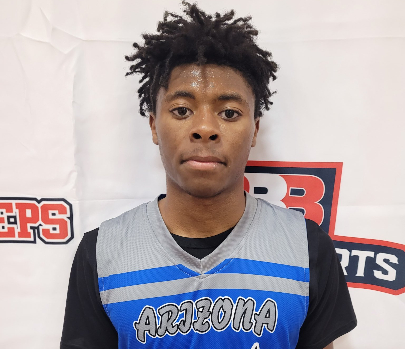 The Arizona Preps' staff continues to bring great dead-period events for student-athletes to be discovered. We were pleased to have (22) teams participating at both sites (Canyon View Prep Academy & Mayer High School) in last weekend's Arizona Preps Beat The Heat event in Northern Arizona. This event brought in teams from the Phoenix, Tucson and western and northern areas of Arizona. We are pleased to evaluate Arizona’s best prospects from the entire state.

This event was a lot of fun to put together, because we were able to get a lot of teams from rural areas. Don’t write-off teams from the smaller towns, because there is a collection of small college prospects who could play at the NAIA, D-3, and D-2 levels. Here are the performers who stood out:

Josh Neal - Mohave Accelerated 6-3 Guard 2022 - Coming off of a runner-up finish in state playoffs, the Patriots are preparing to win it all this season. Neal impressed with his good length, IQ, quickness and physicality on both ends. Neal is a nice athletic prospect who has a great feel for the game, especially knowing how to read defenses and exploit their weaknesses. This young man can go and would be a nice small college prospect.

Lucas Leslie - Mohave Accelerated 2023 6-3 Wing - Leslie impressed with his range, IQ and feel for the game. He has the IQ and ability to play the shooting guard or small forward spot. Another well-rounded prospect that would be a nice pickup for a small college and will produce. I anticipate Leslie and teammate Neal combine as one of the top back-courts in the 1A Division.

Austin Brusso - Mohave Accelerated 2023 6-5 Forward - Brusso is a nice prospect with a strong inside presence and soft touch. A traditional back-to-the-basket post player with a decent drop step. He finishes well with his soft hands. He would be another nice pickup for a small college, and I anticipate he will grow another few inches. College coaches take note, as he has a nice feel for the game.

Aiden Baker - Imagine Superstition 2022 6-1 Guard - Baker is a nice combo-guard prospect with good vision, slashing and on-ball defense. He has the ability to score at all three levels. A sleeper prospect with tremendous upside. He would be a steal for any NAIA or D-3 program, as I feel he could compete at the D-2 level.

William Cooks - NFL Yet 2023 6-2 Wing - Cooks is a nice athletic prospect and a strong downhill scorer. The Eagles, under Coach Albert Ramirez, have some pieces to make some noise in the AIA's 2A Division.

Kris Floyd - NFL Yet 2022 6-1 Point Guard -  Floyd is an elite guard prospect who's game mirrors Allen Iverson. He is an under-the-radar prospect with tremendous upside, and can score and facilitate. His ability to break down defenders and create scoring opportunities for himself, or his teammates, was probably the best I’ve seen among small high school prospects. He is a D-1 sleeper prospect who can compete at the low to mid major D-1 level. A hidden gem college coaches take note.

Ben Cook - Sedona Red Rock 2024 5-8 Guard - Cook lit it up from long range. A sneaky scorer that can disappoint opponents if left open.

Tyson Banks - Mohave Accelerated 6'6 2023 - Banks is a strong post player with touch around the rim. His back-to-the-basket game is on fleek, as he has nice post moves and finishes well inside.  Scout: (Aaron Monteverde)

Cameron Bais - 5'10 Meyer HS Guard 2023 - Bais is a confident three-point shooter. He is also a strong post defender who talks and keeps his teammates involved. A team player who does whatever his team needs him to take care of. Scout: (Jared Smith)

Antonio Rigney - Benson HS 2022 5-10 Guard - Rigney is a solid facilitator, athlete and can score at all three levels. He is a nice small college sleeper prospect.

Devin Bowling -  2022 5-9 CG - Bowling is a physical downhill prospect that finishes well through contact. He is another small college sleeper prospect. A multi-sport athlete who is strong and athletic.

Angel Rigney - Benson HS 2023 5-9 Guard - Rigney plays with good intensity. He has a great feel for the game, as he is very athletic and tough. Another nice, small college prospect with good athleticism and strength.

Caspian Jones - Hillcrest Prep 2025 6-5 Wing - Jonesis a high major prospect who has a high IQ and impressive skill level for his age. He can play both forward positions. He can guard all (4) positions on the court as well. Hillcrest Prep has added an open division team into the Canyon Athletic Association. Coach Chris Hurst has a nice collection of young talent to make some noise in the CAA.

RJ Lee - (pictured) Hillcrest Prep 2023 6-2 Combo Guard - Cousin of NBA player Courtney Lee, Lee is a nice mid-major prospect who has an excellent motor, great finishing ability and range. Lee has the ability to break down defenders and finish strong at the rim. He has impressive bounce and athleticism. Lee’s stock has been rising and will be a steal for a low to mid-major program.

Makai Taylor - Hillcrest Prep 2025 5-6 Point Guard -  Taylor  plays big for his size he has great passing and finishing ability. He will be a nice prospect if he continues to develop at the speedy rate.

Angel Mendoza - Gila Ridge 5'7 Point Guard - Mendoza has a quick first step and uses it to penetrate and find the open teammates. A pass first point who will knock down the open shot if he is left open. He is a nice small college prospect. Scout:  (Aaron Monteverde)

Jordan Stevens - Gila Ridge 2022 6'3 Forward - Stevens is a  leader and communicator who is a strong rebounder and gets to his spot to finish. A high-post play-maker and a three-level scorer with great finishing ability. Scout: (Aaron Monteverde)

Tyler Gebin - Arizona College Prep 2022 5’11 Guard - Gebin has a smooth, left-handed game with the ability to set up his teammates first and score on his own. He plays hard and gets to the rim to open up opportunities to score. Scout: (Aaron Monteverde)

Jonathan Kearney - Arizona College Prep 2023 5’9 Guard - Kearney is a knockdown shooter who can use his ability to stretch the floor to create other scoring opportunities for himself or his teammates. Scout: (Aaron Monteverde)