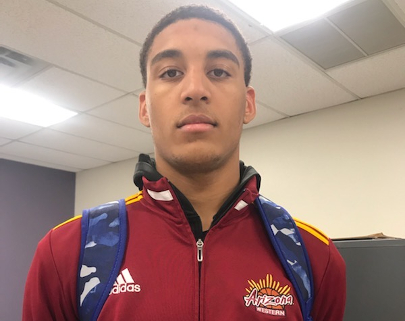 The 2021-2022 junior college season was one to remember as Arizona junior college programs returned to the basketball court in full force, after a COVID-year when most programs were not permitted to participate. After a year off for the conference, the Arizona Community College Athletic Conference (ACCAC) returned to action this season, and it was an exciting season all year long, and ended in fine fashion with Cochise College winning the ACCAC Division-I Conference Championship, and Scottsdale JC ultimately winning the ACCAC Division-II Conference Championship. As a result of the season, we have selected our Players of the Year for both DIvision-I and Division-II Junior Colleges in the ACCAC.

Arizona Western finished with an impressive 25-4 overall record during the regular season, and finished as the ACCAC regular-season champions with an impressive 18-2 conference record this season. The play of 6-foot-8 freshman post Yaxel Lendeborg (pictured) was a key component of the strong run by Arizona Western throughout the season, which resulted in a 15-game winning streak in the conference, which allowed AWC to take over first place during the season. A native of New Jersey, before coming to Arizona Western, Lendeborg averaged 12 points and 11 rebounds this season, while shooting an impressive 60.7% from the field. Lendeborg led the conference in rebounding this season. He is a talented forward prospect with good size and athleticism, and is able to stretch the defense with his ability to handle and shoot the basketball from the perimeter. He was often used as a ball handler by Kyle Isaacs and his staff this season, which was very unique for a player his size. He has excellent versatility as a player. Lendeborg is also on pace to graduate this spring, so he could sign with a Division-I program this off-season. A nice prospect for a Division-I college program at the mid-major level or higher.

Our top overall prospect in the conference, Glendale's 6-foot-8 sophomore forward Adam Hamilton has really grown into his abilities over the past several years, and turned in his best season to date - averaging 18.5 points, 10.6 rebounds and shooting 52.6% from the field in the process. Hamilton ranked second in the conference in scoring and 3rd in rebounding, while leading his Glendale team to a second place finish among Division-II programs in the conference and an 18-13 overall record on the season. Hamilton's college recruitment has been very slow for him, as he is well deserving of much higher college recruitment. He currently has an offer from Lamar University. Hamilton is a rare find for his size, as he can play inside and out and has a large and lengthy frame, which allows him to block and change shots, and also finish strong around the paint. He runs the floor like a guard and has excellent versatility as a player. He has become much more consistent in his shooting stroke from longer ranges, and also has a nice mid-range jump shot, and is also able to put the ball on the floor and make aggressive plays at the rim and around the paint. His upside is glaring and he is also a fine young man with an excellent approach to the game, and a fine personality. He will make a Division-I college program proud, and he has still has major upside as a player, as he is still only 19 years of age.