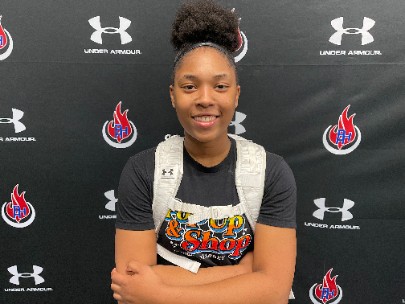 Over the past year, our experienced and dedicated staff of scouts have covered a lot of high school games within the state and abroad, and, as a result, we have released our NEW Arizona Preps Player Rankings for girls basketball in the state of Arizona. We have compiled our list of player rankings for each class of high school prospects in the state - 2021, 2022, 2023 and 2024 Classes. These player rankings will be released on each of our Arizona Preps' social media outlets, and also sent out to hundreds of women college basketball programs across the country.

We continue our release of our Spring Player Rankings (Rankings will be updated during the Summer and the Fall seasons) with our Individual Player Rankings for the 2022 Class.

This junior class is absolutely loaded with some top-rated college prospects for college programs. Our NEW Player Rankings for the 2022 Class are led by a dynamic pair of college prospects that are among two of the hottest prospects in America - PHH Prep's 6-foot-7 junior post Kennedy Basham and Valley Vista High School's 5-foot-11 junior guard/forward Jennah Isai.

PHH Prep's unicorn, 6-foot-7 junior post Kennedy Basham, like Isai, is regarded as a top-rated national college prospect by ESPN - currently ranking as the #28 overall nationally in America's 2022 Class. This is an amazing honor for any college prospect, but significantly more impressive for an Arizona basketball prospect. Basham decided to transfer schools during the high school season this year, as she left Pinnacle High School for PHH Prep, where she teamed up with many of her club teammates - leading PHH Prep to a National Championship on the Grind Session.

Basham is a rare find nationally, not just locally, as she is a long, rangy post prospect with very good low-post footwork and an advanced overall feel for the game. She has excellent low post footwork for her young age already, and a nice jump hook that is very difficult to defend. She is patient in the low post and makes strong offensive moves in the paint, or looks for cutters and the open player on the floor for her team - making her team's offense very efficient as a result. She also has a soft touch from the perimeter, and has a nice ability to make shots from mid-range, or step out even further if needed.

Basham is an amazing defender, as she is among the elite shot-blockers in America, and blocks or alters almost every shot in or even outside of her area. She has excellent timing as a shot-blocker and rarely leaves her feet to block shots. She is an imposing force in the middle of the paint, and makes it very difficult for opposing low-post players to be successful around the basket area. After she blocks shots, she keeps the ball in play and advances the basketball to her teammates for fast-break opportunities, while being able to push the basketball herself when needed and finish strong on the other end. Basham runs the floor like a guard and runs the floor hard. Also an active rebounder that rebounds outside of her area. Basham is terrific on both ends of the floor, and simply changes the game for her team and, of course, her opponents.

Basham is one of the top recruited prospects in the country, already receiving scholarship offers from such programs as UCLA, Washington, Oregon, Colorado, Kansas, Pennsylvania, Georgetown, Loyola Marymount, Utah and Vanderbilt. The list of college scholarships will absolutely continue to grow for Basham over the next year, or until she decides to give her college commitment. It is still unclear where Basham is leaning in her college recruitment.

Jennah Isai is among the nation's elite individual prospects, as she is currently ranked as the #26 overall prospect in America by ESPN - also an amazing honor for any college prospect, but significantly more impressive for an Arizona basketball prospect. Unfortunately for Isai, she has been nagged with some serious injuries that have caused her to miss many games over the last two high school seasons. She has flourished though during the spring and summer club seasons though, and has torched her competition when she has been healthy. Isai is a different prospect with size, an advanced skillset and an aggressive playing style that simply makes her look different than her opposition. She is a unique looking prospect, and backs it up with a flat out ability to ball.

Isai is a special prospect, as she is very skilled with excellent size on her frame - able to play as a guard or forward with excellent versatility. She has an advanced skillset that allows her to play as a guard or forward, and is able to make shots from the standstill position on the court, or off the dribble, on the move. She is a very good shooter of the basketball with excellent range on her shot and a quick release. She is also able to create for herself and others off the dribble at a high rate, and is shifty off the dribble - changing directions nicely and finishing at the basket, around and over defenders. Jennah can play inside and out, which will benefit her nicely over time, especially in the collegiate ranks. She has the game and skillset that suggests that she will become a pro over time, with continued focus and hard work. She is a strong rebounder and also competes hard. She is also a terrific passer, that passes the ball with either hand, and sees the floor well. Her versatility makes her difficult to defend, and helps her makes teammates around her better.

Isai is already blowing up in her college recruitment - receiving Division-I offers already from such college programs as Arizona, Michigan, Oregon, UCLA, LSU, Florida, Texas, Georgetown, Cal, St. John's, Texas Tech, Georgia, Colorado, UNLV, BYU, Mississippi State, Cal State Fullerton and Columbia. This is a very attractive list of women's college programs for a junior prospect, and she is just getting started, as she is set to have a huge junior season for herself. Isai should become one of the most decorated girl's basketball prospects in the history of the state of Arizona over time.

Checking in at our #3 overall spot in the rankings is a terrific guard prospect, PHH Prep 5-foot-7 junior guard Trayanna Crisp (Arizona State commit). Crisp (pictued) is a big-time guard talent that is also worthy of a Top 50 National Ranking, as she is coming off an excellent junior season for herself. As result, Crisp recently gave a big verbal commitment to Arizona State University - the first 2022 prospect commitment for the Sun Devils.

Crisp is a serious guard prospect that plays both ends of the floor at a high level, and is an elite-level scorer that is able to score off the dribble and create for herself or her teammates, almost at will. She is a strong ball handler and creator off the dribble. She is also a very good shooter with excellent range on her shot, and she makes shots consistently, especially in big game situations. She is a strong driver of the basketball and an excellent finisher in the lane, and does not mind physical contact.

Crisp is also able to play either guard position on the floor and make plays at a high level. A fundamentally sound and complete guard prospect that will play immediately in college. Our staff would expect to see Crisp climb the national rankings this spring and summer among the nation's top overall prospects in the 2022 Class.

Here are our complete Player Rankings for the 2022 Class of girls prospects in the state of Arizona, which is an absolutely loaded class of prospects . . .

Our Player Rankings for each class of prospects will be updated in the Spring, Summer and Fall throughout the year, based on our staff's evaluations of these prospects in high school, club and Arizona Preps' events. An individual prospect can improve or drop in our Player Rankings, as a result of strong or poor game performances.