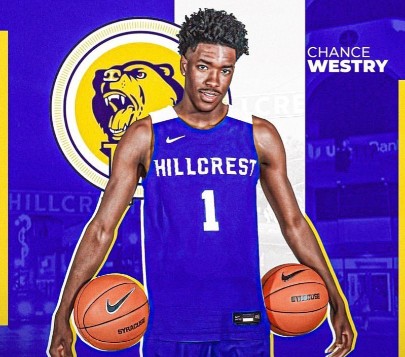 The Arizona prep schools have and continue to change the game in Arizona, raising the bar consistently each year and taking basketball to another level. Just when you think these schools have depleted their rosters after losing players to graduation, each of the state's top prep programs retool and come back the next year and load back up with nationally-ranked prospects. While PHH Prep is among the elite prep programs in the state, they continue to do it annually with local prospects. For other local prep programs in the state, you never know who you will see suit up annually, and some times from game to game. Here are just some of the elite prospects that have decided to leave their current programs, and now will venture to play for Arizona prep school programs this fall.

Annually over the past (10) years, each year Hillcrest Prep makes a big announcement of a national elite prospect, and this year's top addition, thus far, is Westry. Westry is an elite-level talent that should thrive in the open court system at Hillcrest, and especially with the loads of talent that the program already has.

Hillcrest Prep has also added the services of top-rated Ohio guard prospect, 6-foot-1 senior guard Paul McMillan IV to next year's roster. McMillan is also an elite guard prospect with loads of talent and also offers - possessing offers from such programs as Louisville, Georgetown, Arizona State, Purdue, Kansas State and Xavier, just to name a few. Another elite talent that should thrive at Hillcrest alongside Westry and other top-rated prospects already on the Hillcrest roster.

AZ Compass Prep has also completely retooled and their coaching staff believes that next year's team will be the best they have ever had on paper, as the program has announced numerous additions to the program. There are almost too many new top-rated prospects to go over. AZ Compass Prep was led heavily last season by the superb play of University of Kentucky signee Ty Ty Washington, so losing Washington to graduation has given the impression that AZ Compass might take a step backwards, but instead, the program has forged ahead, and will have a very loaded group, led by numerous new prospects to the program. Starting with one of the nation's elite point guard prospects, Dylan Andrews (UCLA commit), AZ Compass will be loaded next season. Andrews is a very skilled point guard prospect with an excellent handle and feel for the point guard position. He makes players around him better and is a nice scorer of the basketball and shooter that keeps defenses honest, while also being able to attack the lane and finish strong around the rim. He also has a good feel for running the pick-and-roll and making plays for his team. Andrews was a standout performer at the recent Pangos All-American Camp, and has already given an early commitment to UCLA, which shows just how good this young man is and is regarded among he elite prospects in America.

AZ Compass Prep has also added the services of terrific 5-star 6-foot-6 junior forward Marquis "Mookie" Cook. A native of Portland, Oregon, Cook is a big-time talent that will rise to the top of our next 2023 Player Rankings, as he is the highest rated overall prospect now in Arizona, after Dream City Christian's Shaedon Sharpe (#8 by ESPN in 2022). This young man is the highest rated prospect from Oregon, since Kevin Love (Cleveland Cavaliers-NBA) and Kyle Singler (Detroit Pistons-NBA), as he is currently ranked as the #13 overall prospect nationally by ESPN. Cook also possesses a long list of offers already, early in the recruiting process, as he is among the elite overall prospects in America. He already possesses offers from UCLA, Kansas, TCU, Auburn, Texas Tech, USC, Memphis, Arizona State, Washington, Oregon and Washington State, and others. His list will only continue to grow this summer and next season, as he is still only a mere junior prospect. He has very good size and physical strength for the wing position, and can play inside and out with excellent versatility. Another huge prospect in the Arizona prep school ranks.

AZ Compass Prep has also added 4-star, 6-foot-8 senior wing Colin Smith. Smith is another superb talent with a nice skill level. A native of Houston, Texas, Smith is a high-priority target by many high-major Division-I programs and has recently trimmed his recruiting list to (10) schools - Michigan, Oregon, Stanford, Vanderbilt, Texas, Minnesota, Arkansas, Illinois, Arizona State and Virginia. Smith comes to AZ Compass Prep with a nice list of college suitors, in an attempt to play at the highest level nationally and improve himself through high-level competition. Smith is a very skilled wing prospect with a nice shooting stroke and excellent versatility as a player.

AZ Compass has also added 6-foot-4 senior Lamar Washington to the program. Another native of Oregon, Washington is a skilled guard prospect that can score the basketball in bunches, and also locks up defensively. Washington also has a long list of offers already for himself from Texas Tech, TCU, Oregon State, Washington State, Pepperdine and Portland, among others. Washington will be able to compliment the other many gifted prospects on the AZ Compass lineup.

These are just some of the many top-rated prospects that have announced their decisions to play in Arizona next fall. There are also many more top-rated prospects to write about and to consider at Bella Vista Prep, who is still building their lineup. Skyline Prep in Phoenix will also now be adding a National Team to their program as well. Stay tuned as the prep schools in Arizona have taken Arizona basketball to another level and continue to change the game. I look forward to announcing many more additions to these prep schools from outside our state, and even more look forward to covering each of them.