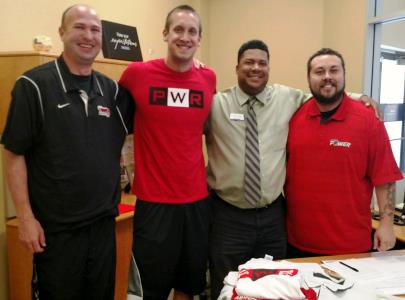 In an attempt to create one major, shoe-sponsored club basketball program for the state of Arizona, the state's top two biggest and most successful club programs in the state have decided to join forces.  On Monday, club organizers for both programs, the Arizona Power and the Arizona Magic, came together and signed an agreement to work together for the spring and summer of 2016 to give Arizona's top basketball prospects a premier basketball program to be proud of.

"Many of Arizona's top basketball prospects over the past 10 years have been recruited by out of state teams," said Arizona Preps' own Anthony Ray, founder of the Arizona Magic club program.  "Our goal is to put aside any differences that we had to come together to make one strong program.

The joining of forces by the Magic and the Power program will create the biggest club program in the state's history - a monumental moment in club basketball in the state.  The goal by the two organizations is to give Arizona prospects a program that they can be proud of - keeping top Arizona prospects home.

"There are still a lot of moving parts," said Ray.  "It will take some time to get everyone on board and make it work best for everyone inolved, but this is something that very much needed to happen in the state.  Bringing the two program's top prospects together will give the state one powerhouse team at each age division to compete on a national schedule, and, ultimately, bring a shoe contract back to the state of Arizona."

This merger between the Arizona Power and the Arizona Magic is unprecedented in the state of Arizona, and will make Arizona basketball stronger and help to reduce the tensions between club organizers in the state.

"This is a great day in Arizona basketball," said John Ortega, a very successful club coach for the Arizona Power program, and also an organizer of the merger.