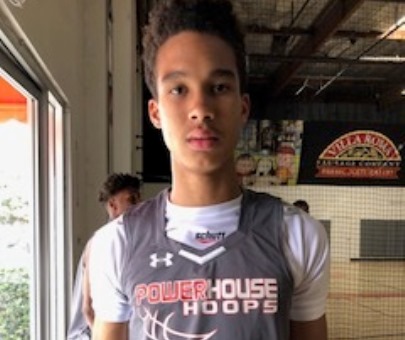 No Arizona prospect has blown up more this spring than Desert Vista High School's rapidly developing 6-foot-9, 185-pound rising senior post Osasere Ighodaro. In fact, this young man has quickly become, in a short period of time, one of the hottest prospects in the country. Ighodaro has seen his college recruitment completely ignite since the end to the high school season. After receiving some very good offers as of late, Ighodaro has now received another big offer from the University of Arizona, along with many other offers as well.

On Saturday afternoon, Ighodaro received another big offer for himself, as Head Coach Sean Miller and his basketball staff have now turned their sights on the surging prospect - extending him an offer, as the Wildcats program looks towards the future.

Osa, as he is known by his teammates, has received a rather large number of offers as of late for himself. After a Vanderbilt offer in March, Osa has received Division-I offers from Texas, Cal, USC, Northwestern, Saint Mary's, New Mexico and Weber State. He also already possesses offers from Stanford, UC-Irvine, Pepperdine, Rice, Grand Canyon, UC-Riverside, San Diego, San Jose State, UC-San Diego, Southern Utah, Montana and Northern Arizona.

Osa's recruitment is on another level at this point, as many college programs are now positioning themselves for the promising prospect. Very rarely does a college prospect see his recruitment shift gears to another level such as this, in one season. Former top-rated Arizona prospects such as Michael Humphrey (Stanford), Mitch Lightfoot (Kansas) and Zylan Cheatham (Arizona State), just to name a few, are names that come to mind when thinking about former Arizona prospects that saw such a quick rise in their college recruitment during the spring and summer before the start to their seasons.

Former Sunnyslope HS graduate Michael Humphrey received close to 50 division-I offers in his final summer before his senior season, which was epic. Humphrey saw his recruitment skyrocket after a tremendous performance at the Reebok All-American Camp. The majority of Osa's recruitment has come from straight playing on the club circuit - an impressive fact.

Ighodaro entered his final spring and summer as one of the hottest prospects in the West, and he has quickly become one of America's top rising prospects. He will look to have an even bigger summer while playing for his Desert Vista HS program, and also his Powerhouse Hoops club program, which has done loads for his college recruitment.

Ighodaro is a nice recruiting target as a result of his promise as a college prospect.  He has a long, lengthy frame that looks like it can mature a great deal still, and he also should add some serious size and strength over time.  He has almost unlimited potential as a player and prospect, and he already possesses a good overall skill level and approach to the game, which is very attractive to college coaches.

This past season as a junior, he was relied on heavily by head coach Gino Crump to lead the program, which had lost a lot to graduation and transfers.  He averaged 9.8 points, 5.7 rebounds, and 2.2 blocks per/game as a junior - numbers that will definitely gain a major boost next year in his final senior season.

I will continue to follow his recruitment very closely, and look to bring you more recruiting updates as they continue to develop.

Arizona Hoop Review Scouting Report:  Osasere Ighodaro is a unique physical talent, since he has excellent size and length and is still growing a great deal into his young frame.  He has a long, lengthy frame that looks like it can mature a great deal still, and also add serious size and strength over time.  He has almost unlimited potential as a player, and he already possesses a good overall skill level and approach to the game, which is very attractive to college coaches.  He has a good shooting stroke with a pure touch out to 15 - 18 feet, but he is at his best from mid-range and around the basket, where he uses his soft touch to convert scoring opportunities.  He has good low-post footwork and a nice jump hook.  He is crafty around the basket which suits him nicely, and, as he matures physically, he will relish physical contact much more over time.  While he will never be truly physical, added maturity will make him a much better finisher over time.  He runs the very floor well and has good hands, but needs to get much physically stronger to maximize his potential as a player.  An active rebounder as a result of his length.  A very capable shotblocker that keeps balls in play.  Has excellent upside.  Potential is almost limitless.