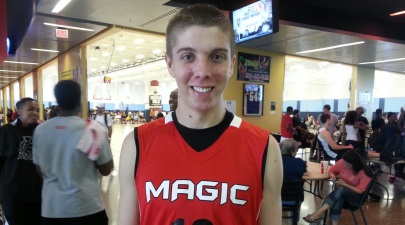 This weekend saw some very exciting basketball action in the state of Arizona, as each of the top club programs in the state of Arizona faced off with one another in what was the event that opened the 2013 club basketball season - the Southwest Showcase Main Event.  Organized again by successful Tournament Director Ron Coleman, this event was as good a club event as the state has seen in many years.  The competition was fierce and each of the state's top players and college prospects matched up with one another for the right to claim this year's tournament championship and bragging rights among the state's top club programs.

Arizona Preps was on hand for the entire weekend's action in this year's 17U Platinum Division.  While we will also focus on other divisions in future tournaments this spring, this weekend's action was just too good to pass up in the tournament's top division.  With numerous different club programs taking center stage this weekend in the top 17U Platinum Division, Sunday's playoff action would determine the tournament victor.

By the time the dust had finally cleared on Sunday evening, the Arizona Magic club program would walk away with their fourth tournament championship in a row at this year's Southwest Showcase Main Event - winners of this same tournament four years in a row.  The Magic organization would finish with 3 of the 4 final teams in the event, as three different Magic teams would reach the semi-finals of the event, while Team Power Black would be the fourth program reaching the tournament semi-finals.

In one exciting semi-final match-up between the AZ Magic Pump N' Run-2013's, a team of unsigned senior prospects, and Team Power Black-2014, a loaded team of top-rated 2014 prospects led by Arizona Republic Player of the Year Casey Benson, would match up in an exciting contest.  While many basketball enthusiasts in the state had believed that this version of the newly developed Team Power program would win it all and waltz through the competition this weekend, the Arizona Magic unsigned senior group would come up big in the semi-final contest.

Coached by Charles White, the Magic PNR-2013 team would get out to a fast start behind the terrific shooting of Westwind Prep 6-foot-3 senior guard prospect Kye De Laveaga.  De Laveaga's hot three-point shooting would help his team build an early lead.  De Laveaga would continue his hot shooting throughout the game - hitting (8) three-pointers in the game to lead his team to a 64-59 victory.