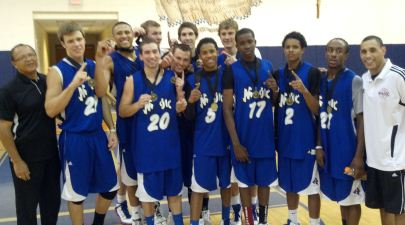 The group of unsigned senior Arizona prospects that make up this year's version of the Arizona Magic Seniors have come a long way in a short amount of time.

Each club season, a group of Arizona players are organized and developed in a span of a month, at the most, in an attempt to gain exposure to college coaches and land a college scholarship, while competing against the best competition the West Coast has to offer.  It is always a very difficult task as each prospect comes to a new team after spending an entire season with their respective high school teams.  As club coaches put in their offense, defense and inbounds plays in less than a span of a month, players hope to develop into a team in a short period of time.

This has definitely been the case for this year's version of the Magic seniors, as each player has one thing in common - they are unsigned and looking to land a college scholarship, or atleast an opportunity to further their playing careers.  Unlike most teams competing this club season, this group is filled with all senior led talent.  With many of the top senior prospects in Arizona's 2012 class already committed, this group of young men is filled with some very good looking prospects for smaller college programs to take a strong look at.

Led by new Westwood High School head coach Hoseah Graham, one of the top pure head coaches in the state of Arizona over the past decade, and Desert Vista HS assistant coach Paul Hardiman, a former top-rated Arizona high school talent, the Magic senior squad is well coached and prepared each game.

After reaching the Consolation Championship game last weekend at the Double Pump Hoop Fest in California and falling to Arizona's own - the Arizona Reign, the Magic Seniors were determined to finish off their performance in this weekend's event in Las Vegas, Nevada - the Double Pump Spring Classic.

The Magic Seniors would go undefeated this weekend (5-0) and win the Silver Division Tournament Championship in the event.  The Magic Seniors would win their first three games of the event, including a big win over the Arizona Aces on Saturday afternoon to advance to the tournament's semi-final game on Sunday.  In the win, the team was led by the play of Westwind Prep 6-foot-7 prep forward Tuff Barnes, who would come up big for his team in the second half and lead them to victory - scoring 18 points in the final 14 minutes of the game.

On Sunday morning, the Arizona Magic Seniors would defeat MBA (CA), 55-45, in the semi-finals of the tournament.

They would then advance to the tournament's Silver Division championship game and face the I-Can All-Stars (CA).  The Magic Seniors would jump out to a 38-35 first half lead, behind the strong play of Tucson Amphitheater HS 6-foot-6 senior post Charles Benson.  Benson would convert numerous baskets inside and also score in transition in the first half to keep his team in front.

In the game's second half, the Magic Seniors would take a big lead, until I-Can would go on a 15-0 run late in the game to keep it close.  With the score tied at 74 all, and both teams looking to win the game in the final minute, Benson would rebound the basketball off a missed attempt by a teammate and convert the offensive putback to give his team the 76-74 victory just before the buzzer sounded.

"It feels great," said Benson after the game.  "We have worked really hard this spring and we deserve to win this championship.  We have a great group of guys."

While many scouts and media at this year's event had believed that one of the Magic teams would win this weekend's event, it was believed that last weekend's tournament champions, the Arizona Magic Pump N' Run-2014's (lost in the semi-finals), would win their second-consecutive event.  Or that the Arizona Magic Pump N' Run-2013's (lost in the semi-finals) would put it all together and win the event.  Instead, it was the hardworking Arizona Magic Seniors.

"The Magic Seniors experienced success because of their unselfish play on both sides of the floor," said head coach Hoseah Graham.  "The team defense held opponents to taking difficult shots and the team's aggressive defensive rebounding kept bigger post players off the boards."

The Magic Seniors did not have one star player, but rather a complete team comprised of unselfish prospects.

"They passed the ball extremely well and always looked for the open man," said Graham.  "They played like a unit and not as individuals.  College scouts commented on their excellent team play."

Here is a list of this year's group of seniors that make up the Arizona Magic Senior team.

Congratulations to this group of young men on their exciting championship victory this weekend.