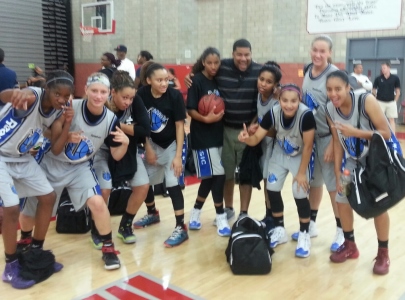 The Arizona Magic Elite 17U girls program is in their first year of operation under the Arizona Magic club basketball program.  After playing in a couple local tournaments where the team struggled to find their identity, the program traveled to Santa Ana, California this weekend to take part in the U.S. Junior Nationals California Classic basketball tournament - an NCAA Certified event.  The event was held at nationally acclaimed Mater Dei High School, and included many top-rated girls programs in the West - including more than 115 different teams in the event.

With several other major girls tournaments taking place around the country, this event was a nice tune-up and kick-off event for girls programs in the West.  The Arizona Magic Elite 17U team would play their best basketball of the season - leading to a perfect 4-0 record in the event.  The program would turn in their best performance of the spring in front of numerous college coaches - earning the respect of the event coordinators and scouts and media in attendance.

The team would play inspired basketball throughout the event and make the state of Arizona proud - defeating tough competition in the event, including a strong double-digit victory over the Nor Cal Elite (CA) in the final game of the event.  This event did not elicit a tournament champion, but instead featured a showcase format - a qualifier event for other national tournaments being held this summer.

Look for this group of talented Arizona girls prospects to raise their level of play throughout the remainder of the spring and summer, as they gained invaluable experience from this weekend's NCAA Certified event.

Notes:  The Arizona Magic 13U girls program won their fifth tournament of the spring this weekend while playing in a tournament held in El Paso, Texas.  The team, coached by Joe Alvarez, includes many of the state's top prospects from the 2019 class.