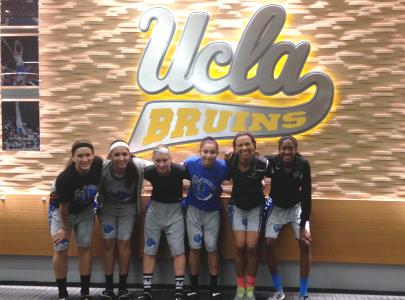 The Arizona Magic Elite 17U girls are a talented collection of 2015 and 2016 girls prospects from the state of Arizona.  This group of girls prospects had an exciting spring and summer, and ventured all over the country to take part in some exciting events throughout the club season.  The team, coached by Tresa Reible, an assistant coach from Valley Vista High School and a former college basketball coach, raised the recruiting stock of numerous players on their team this summer after participating in events in Las Vegas, California, Oregon and Tennessee.

After strong performances this July in the top division of the End of the Trail Classic in Oregon, and then the Music City Madness event in Nashville, Tennessee, the team then made their way to take part in an event in Las Vegas.  After a long grueling summer, the Magic Elite would finish as runner-up tournament champions in the Ballroom Games event in Las Vegas - a very impressive performance by a group of prospects that will return many of their top performers next club season.

The team participated in the top division of each of the events they took part in, and, as a result, received loads of exposure from college coaches.

This spring and summer definitely belonged to the Arizona Blue Star-Power program, as their team featured many of the top 2015 prospects in the state.  This Magic Elite group will look to be the featured team in the state next season as they will return Raina Perez, Jordenn Reible, Rayah Craig, Tilasha Okey and Eli Ozgur next season.  If this group can add some key additions to next year's team, this group will compete with the nation's top teams again next season, and bring a lot of recruiting exposure to themselves and also the state of Arizona.