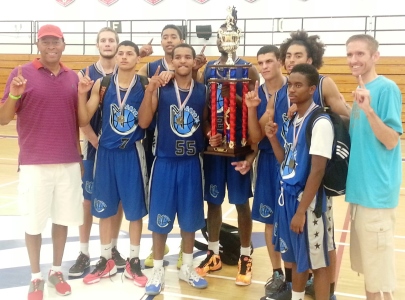 The Summer Sizzle Basketball Tournament took place this weekend at many different high schools around the state.  Organized by PAC-12 referee and club coach Glenn Mayberry, the event showcased a very nice collection of basketball programs at many different age levels.  I was able to catch much of the action throughout the weekend in the 16U and 17U levels, and had an opportunity to watch many of the state's top prospects perform before the busy July evaluation period.

In the 17U Division for this year's event, the Arizona Magic Elite 17U team coached by Kenny Mullins would walk away with the tournament championship, after defeating Team Bibby in the tournament's semi-finals and then the Danny Granger D-I Ambassadors (NM) in the tournament finals.  The team was led by a well-balanced attack of talented rising seniors prospects and two future prep stars.

Sunnyslope HS 6-foot-3 rising senior guard Sammy Thompkins continued his terrific play throughout the club season this past weekend - leading a talented group of Arizona prospects this weekend and still displaying that he is the top 2015 prospect in the state.  Thompkins shot the basketball very well and also proved that he can run a team of gifted performers.  6-foot-3 prep guard Lyrik Shreiner showed that he can do more than just score the basketball at a high rate this weekend - penetrating defenses at will and making plays for himself and others.  The combination of Shreiner and Thompkins was a lot to handle for opposing teams this weekend, and this guard tandem looks to be one of the elite backcourts in the West.

IMG Academy (FL) 6-foot-9 prep post Andre Adams will be one of the most sought after recruiting targets in the country for the post position for 2015.  Adams played inspired basketball this weekend and ha shown excellent development as a young man over the past several months - growing up a great deal mentally in preparation for his long journey to Florida this fall.  Look for Adams to have a big summer for himself before embarking on the biggest move of his young life.

Congratulations to this group as well on a strong performance this weekend and good luck to them this July.