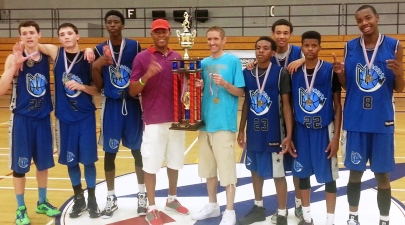 The Summer Sizzle Basketball Tournament took place this weekend at many different high schools around the state.  Organized by PAC-12 referee and club coach Glenn Mayberry, the event showcased a very nice collection of basketball programs at many different age levels.  I was able to catch much of the action throughout the weekend in the 16U and 17U levels, and had an opportunity to watch many of the state's top prospects perform before the busy July evaluation period.

Kirby has developed fast as a prospect and is showing prowess as of late, which suggests that he will blossom into an elite-high major division-I prospect over time.  He has excellent athleticism and length and runs the floor like a guard.  Kirby has quickly risen to the top of the 2016 class with his progress as a player and will have loads of college coaches in hot pursuit shortly.

Bowling is a sharp-shooting wing prospect that is capable of playing as a guard or as a forward prospect.  His sweet shooting ability is very effective and consistent with excellent range.  He has excellent length and athleticism as well, and is developing nicely as big-time prospect for the future.  Bowling has a competitive spirit that goes well beyond his lack of physicality.  Another high-major prospect for the future.

Mesa Mountain View HS 6-foot-5 rising junior forward Zane Jowaiszas had an excellent tournament for himself - playing tough physically and being an enforcer on the glass for his team.  Jowaiszas rebounded hard and finished strong for his team, which was a vital piece to his team's tournament championship.

This team is loaded with top-rated 2016 prospects - a class which is quickly becoming a force for the state and will receive loads of attention from college programs across the country.  Congratulations to this group on their performance this weekend and good luck to them throughout the July evaluation period.