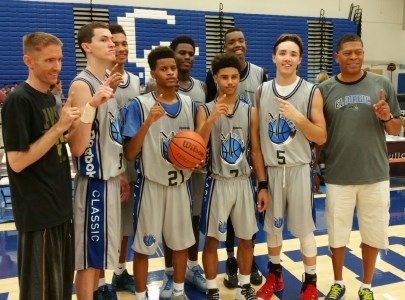 How sweet it is.  With the the recent rise of interest into the state of Arizona by college coaches around the country, the state is quickly becoming known for a hotbed for untapped basketball talent.  Many lesser known prospects this club season have received division-I scholarship offers.  This weekend, a group of talented but underrecruited prospects came together to win their second consecutive tournament of the summer, as the Arizona Magic Elite did what it took to win the Pangos Summer Sweet 16 event in Los, Angeles, CA.

The championship victory was one of redemption for this group, as the program continues to attempt to prove their value on the club circuit amongst the West's top club programs.  The Arizona Magic Elite, which featured a mere 7 different players, would win the championship on Sunday amidst a large group of college coaches.  Behind a terrifc barrage of three-pointers and simply overall superb play from Gilbert High School 6-foot-7 rising senior wing Chris Bowling, the program would come from behind to deafeat a talented, shoe-sponsored Play Hard Play Smart (CA) ballclub in overtime.

Bowling has been playing his best basketball of his young career, but nothing could have prepared us for what he would do on Sunday afternoon in the tournament final.  Bowling would first turn in the dunk of the game - a two-handed dunk on the break over a surging defender.  Then he would catch fire in the late stages of the game and knock down several three-point attempts to send the game to overtime.  In the overtime period, Bowling would continue his terrifc shooting exhibition and lead his team to victory.

Sunrise Mountain HS talented 6-foot-6 rising senior wing Elijah Thomas absolutely blew up in this event.  Thomas was my recipient of the Surprise Player of the Spring, after he emerged during the spring evaluation period as a serious college prospect.  Thomas would get off to a slow start, but would ignite late in the game when it counted to support the big win.  Thomas would throw down a monster dunk on the baseline past a defender, and then would make several big shots to seal the win.

No player or prospect helped themselves more in this event this weekend than Apollo HS 5-foot-11 rising junior guard Holland "Boo-Boo" Woods.  Woods is a big time ball handler and floor general, that plays with superior confidence and knows how to run a team efficiently.  Woods is a ball hawk, and has a very developed feel for the game - combined with superior ball handling.  Woods ability, almost by himself, to hold down the backcourt on the offensive end and apply constant presure on the opposing guards was vistal in this team's championship performance.

Dysart High School's 6-foot-10 rising senior post Malik Ondigo struggled for much of the tournament with severe tendinitis in his knees, suggesting he is still growing, but he came up big in the semi-finals and tournament championship game - blocking shots and rebounding the basketball.  Ondigo also finished relatively well inside for his team - provinding the Magic with a solid post presence in the tournament win.

Campo Verde HS 6-foot-7 wing Brandon Whitaker has tremendous upside as a player and in this year's event, he put it all together for himself displaying a nice touch from the perimeter and showing off superb athleticism in the open floor.  Whitaker should see a real boost in his college recruitment now, as a result.

Copper Canyon HS rising senior guard Terry Gates was terrifc once again on the defensive end, and he also provided excellent depth in the backcourt.  Gates has been a consistent performer for this team, and his ability to play at a high level separates from from players at his position.  Gates opened up many eyes with his play this weekend.

It has been a tough road for Mesa Mountain View HS 6-foot-5 rising senior forward Zane Juwaiszas.  After he severely injured his ankle in the spring, Juwaiszas returned to provide excellent interior depth, rebounding and toughness for this team - a benefit that really made the team tough to beat.

This Magic team will take a few days off before traveling to take part in the Great American Shootout (GASO) in Texas later this week.