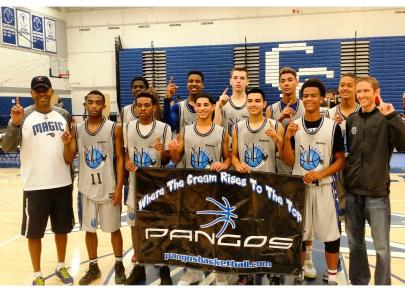 The state of Arizona received a nice boost in our basketball reputation this weekend with the superb success of prospects from the 2017 class.   With the combined success of the D-1 Nation 16U squad and also the Arizona Magic 16U team, both teams have steamrolled their competition on the AAU/club circuit and should garner much recruiting interest for the state.

This weekend, after recently winning the last Pangos Spring Spectacular event in Vegas, the Arizona Magic Elite 16U team, coached by Kenny Mullins was back at it again this weekend, but this time in Los Angeles, CA.  His team went undefeated, once again, and would win their second-consecutive 16U tournament title at the Pangos Sweet 16.

This group also recently received a #6 regional ranking in the West by Indihoops.com amongst 16U teams, so it will be very interesting to see how much another major tournament championship will affect their regional ranking.

This team has a very balanced attack, as each player for the team contributed to the tournament victory.  The team is primarily led by the play of Tri-City Christian High School's 6-foot-8 sophomore post Nigel Shadd - a serious post prospect that is beginning to garner much division-I recruiting interest.  Shadd has a long, athletic frame with a good wingspan and nice physical strength.  A bright, young prospect for the future.

Mesa Mountain View HS 6-foot-8 sophomore forward Curtis Hodges is another nice talent for the future - a skilled post prospect that runs the floor and can finish in trafffic.  Hodges has a long, athletic frame that allows him to make plays that many post players cannot.  An attractive post prospect that will receive major recruiting interest over the next two years.

Desert Vista HS 6-foot-9 freshman post Steele Bennett is a member of the 2018 class, and this young prospect has the potential to develop into another prospect like that of former Sunnyslope HS superstar post Michael Humphrey.  A very long and rangy post prospect, Bennett is still very young but exudes potential and size for the future.