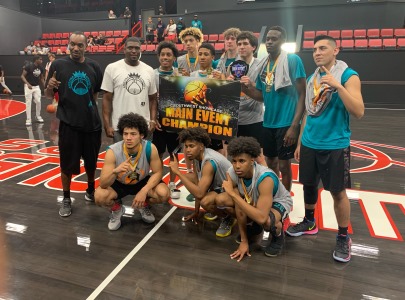 The Southwest Showcase Main Event took place this weekend on the campus of numerous different locations around the state.  Organized by Tournament Director Ron Coleman, this annual event kicks off the spring club season every year and is an amazing event to cover annually, as this event is the one that club teams around the state utilize to create bragging rights for the club season.  This weekend's event was the biggest event ever as the event was compised of more than 200 teams this weekend.

With many of the state's top club programs in LA this weekend, this weekend's event was missing many top teams from the 17U and 16U Divisions.  With many teams still in action this weekend, Arizona Preps was on hand in full force this weekend to bring you the top performers from the weekend.

On Sunday afternoon, many of the teams took the floor to win the tournament's championship in preparation for the spring's evaluation period.  The creme of the crop from thsi weekend's event was a program that we have not seen for some time, as the Arizona Dynasty returned to action this year, after a long hiatus.  This program was created years ago, but took many years off after many of their top peformers had entered the high school ranks.

This weekend, led by the play of Jackson Ruai, one of the top unsigned prospects in Arizona's 2019 Class, the team knocked off some strong competition to win it all - defeating Team Harden 17U in the championship game by a narrow margin.  Ruai did it all in the event, and chose not to score the basketball as much, but rather spent his time on the defensive end of the floor making plays happen for his team.  Instead the Tournament's Most Valuable Player was given to 6-foot-3 junior guard Cesar Saenz for his performance in the event, which included numerous three-pointers and tough, hard-nosed play on both ends of the floor.

The Team Harden 17U program will be on the Adidas Gauntlet this spring and summer, so it was widely expected that their program would walk away with this weekend's championship trophy.  While the team was missing some of their top performers for the weekend, this team was still very talented and expected to walk their way to the final game of the event.  While the team would make it there, they would run into a very hard-nosed and tough Dynasty team that would have a different idea in mind.

The Dynasty would play tough throughout the game, and hold on to a nice lead in the contest for much of the game, before walking away with the tournament title late in the contest.

Congratulations to the Arizona Dynasty team on this weekend's tournament championship, and good luck to them this spring.

I was on hand for all of Sunday's action, along with members of our staff.  Here are my top overall performers from this weeknd's event, in no particular order . . .

Lliya is coming off a very good junior season where he put up very strong numbers on the season.  As a result, he looks prepared to have a big spring performance for himself.  While Lliya was unable to lead his Powerhouse team to the championship of this weekend's event, he did have a strong performance for himself.  Lliya slashed hard to the basket and played very well in the open floor.  While he still needs make shots from the perimeter with regularity to open his game for the next level, Lliya is a big-time talent should raise a lot of eyebrows with his play this club and high school season.

Ruai is an electric guard prospect with a long, rangy body and excellent quickness and athleticism.  He plays much bigger than his size suggests as a result of his length and bounciness off the floor. He is a good shooter of the basketball with range on his shot, and can create his own shot effectively off the dribble, although he did not shoot the basketball much this weekend.  He is an excellent finisher in traffic and in the open floor. He is an excellent defender with good court anticipation and is able to play passing lanes effectively for steals and transition baskets. He has the ability to become a lock-defender over time. While he was once down to three schools, Ruai is a very good sleeper prospect that will now wait until the end of the spring to make his college decision, and could wait even longer.

Dusell is a nice talent with a very good shooting stroke with unlimited range on his shot.  Dusell is coming off a very good season for himself where he shot the basketball very well down the stretch during the season.  He has continued his strong shooting of the basketball this spring, or atleast in this weekend's event.  As a result, Dusell could really open up some eyes this spring and should really benefit himself with continued strong play.  While he is currently being recruited now at the low to mid major level, Dusell could really benefit himself this spring and summer, as more college programs look to build their program with excellent shooting.

Aguek had his best performance to date, as he has grown physically in size and is now much more physically imposing, as a result of his tremendous length and athleticism and ability to change and alter shots.  Last summer, he received a scholarship offer from Idaho State for his performance, and while he is still available, he is much more attractive now as a college prospect.  Aguek is able to defend several positions on the floor and also is able to run the floor and finish strong at the rim.  He is an active rebounder also and has an excellent motor on both ends of the floor.  A very intriguing prospect that should raise eyebrows of any college programs taking a hard look at him this spring.

Hudgins is one of the best guard prospects in the class, and is looking to make a name for himself among the best guard prospects in the class.  Hudgins is coming off a strong junior season for himself, and is now preparing for a big club season as well to kick-start and also raise his overall level of college recruitment.  Hudgins is a young prospect with a nice overall skillset and an ability to play the game at a high level.  He is a nice offensive weapon with a nice ability to push the ball up the floor and make plays for himself and others.  While he did not particularly have a greatshowing this weekend, he looks prepared to have a strong showing for the remainder of the club season, as this event was a nice tuneup.  Has the potential to really make some noise this club season.

An active rebounder and tough wing prospect with good overall size and a nice overall skillset, that allows him to play inside and out.  He is a very good ball handler and passer, and is able to make plays for himself and others off the dribble.  He led his team to a runner-up finish for the 16U title in the event.  Still raw offensively, Moses is a nice talent for the future and was one of the top surprises from thsi weekend's event.

Lewis is a nice talent with a nice skillset that suggest that he will only continue to improve over time and develop as a college prospect.  Lewis has really grown on me over the past two years, as he is very athletic and plays well above the rim and in the open floor.  He has very good upside as a player and should only continue to improve over time.

Brennan is a nice post talent with very good size and broad shoulders for the post position.  He is very active on both ends of the floor and is strong on the offensive glass.  He is also an active shotblocker with broad shoulders and a developing body that is still growing a great deal.  He runs the floor hard and came up with a big blocked shot late in thechampionship game, which helped lead the team to a championship.  He has a bright future ahead, even though he is still raw offensively and developing.  He should develop nicely over the next two years of high school basketball, and could develop into a serious college prospect.

Donaldson is a very skilled ball handler and passer that is capable of playing both guard positions on the floor, and is a high-energy scorer with the basketball in his hands.  He is a solid defender as well that accepts challenges on the court, and is willing to guard the opposing team's best player.  A lesser known prospect, Donaldson is a nice looking guard prospect that is a good scorer of the basketball and plays with a good overall motor.  A sleeper prospect in the class.

Sandoval is as good a defender as I have seen one-one-one, as he plays with excellent energy on the court and competes at the highest level.  His toughness defensively and his level of intensity was difficult to match on the floor on Sunday, and, as a result, he raised the overall level of intensity for his team, which ultimately led to a championship for the Dynasty.  Sandoval took the basketball strong to the basket, and finished at a high level - especially in the open floor where he even finished with several dunks that brought the crowd to their feet.  A two-sport star, Sandoval should play football in college to maximize his potential at the collegiate level, but he loves the sport of basketball.  Wherever he lands, this young man will help a team win.  Love this kids attitude - on and off the floor.

Martin is a nice talent that is capable of playing both guard positions on the floor, and even as a small forward as needed.  From the state of California, this was the first time that we have seen Martin perform, and he had an excellent weekend - leading his Team Harden 16U team to a championship finish in the 16U Division.  Martin is a nice talent that helps to take the Harden 16U team to another level.  His ability to finish and make plays off the dribble made it very difficult for opposing teams to defend him throughout the event.  Martin is a bigger guard prospect with a nice shooting stroke with range on his shot, and is able to also take defenders off the dribble as well.  A good finisher in traffic and in the open floor.  A good overall looking prospect.

A big-time shooter, Monroe is a marksman of a shooter with unlimited range on his shot and an ability to catch and shoot with regularity.  He is a skilled guard prospect with the ability to play both guard positions on the floor.  He led his team to a runner-up finish for the 17U Open Division, and played very well in the event - proving that he has the ability to play at a high level this spring and summer.  While he can go almost unnoticed, since he does not have much size and is not dunking over defenders, his overall skill level is something to look at and makes his jump out at you. I have been very impressed with this young man throughout the season, and believe that will have a nice club season, and also have a big senior season in the AIA ranks next season.  Another good sleeper prospect.