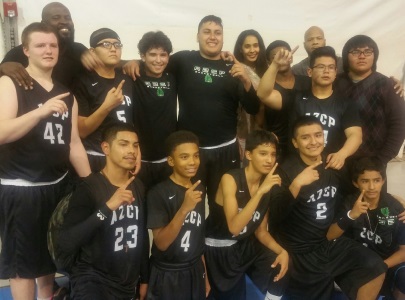 Arizona Compass Prep is a charter school located in Chandler, Arizona that has not been known for the sport of basketball over the years.  After only winning 1 game in 5 years at the school, the program has made some serious changes to the basketball program in hopes of landing true success in the sport.  This season the team has been terrific, and on Tuesday evening they won their first ever Conference Championship.

This season Arizona Compass Prep (AZCP) has built a very impressive record of 11-1 on the high school season - posting 11 more wins than they did the previous season.  A ridiculous turn around this high school season that can be attributed to the leadership of first-year head coach Ray Weathers.

We have spoken previously about the quality leadership provided by Weathers, but it has been at such an amazing level that I personally can never get tired of it.  Weathers' non-wavering level of consistency and attitude towards his players has been the ultimate difference this high school season.  I have personally seen it, as I have watched these young men develop under Weathers.  A close personal friend of mine, I have followed Weathers and his team this high school season and have watched as this team has grown under his influence and guidance.

In many of the games that I have seen this team play this season, AZCP has not had the most talent, but they have won each of their games as a result of their tough play and self-confidence in themselves.  Their team play and selfless attitude on and off the floor has been the catalyst that has helped lead them to numerous victories this season.

On Tuesday evening, the team was down by 11 points in the third period, before turning things around en route to a big 82-65 road victory.

It was a packed house tonight," said D-5 Skyline head coach Mike Craig.  "We normally only get 5 or 6 fans."

The gym was filled on Tuesday evening to watch the Arizona Compass Prep team perform, with many fans in attendance hoping for the upset.  AZCP was never known to be the team that would be upset, but rather always the team that would look to do the upsetting.  After 1 win in 5 years, it didn't happen often.

This season, Arizona Compass Prep will have their first ever opportunity to win a state championship in their division among charter schools.  While not a major feat for many basketball enthusiasts in the state, for these young men it is the only thing.

I have grown really close to these young men this season, as I have watched by close personal friend Ray Weathers transform these individual players into a team - a winning team.  They will have an assembly at the school this Friday, a celebration for the school's first ever Conference Championship.  It will be a great day for this program.

The great thing for Arizona Compass Prep is that regardless of what happens the remainder of this high school season, the future looks extremely bright.  The team has no seniors and many freshman and sophomores.  We will be talking about this group for a long time.