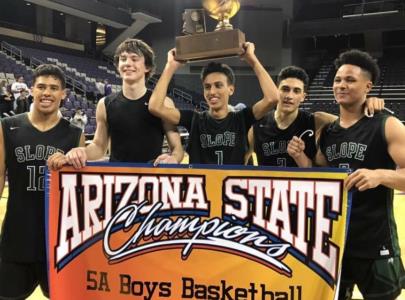 In the former words of past South Mountain High School head coach, now current UCLA assistant David Grace, "I know it's going to be a good day, because I hear balls bouncing."

This season will be an exciting one again as it will be highlighted by several teams that will lead the way in their respective divisions.  Shadow Mountain, Desert Vista, Pinnacle and Sunnyslope are our top four teams in the state, regardless of class, and will be the teams to beat this high school season.

Desert Vista is back to make up for their semi-final loss last season, and will look to make it all better with a 6A State Championship this season.  Head coach Gino Crump, in his second season, returns with one of the state's most talented teams.  In fact, the only team in the state that can match their level of talent and athleticism is the 4A Division's Shadow Mountain.

Crump and Desert Vista are our favorites this season to win it all in the 6A Division, as the Thunder will feature a loaded group led by the play of star 6-foot-1 junior point guard prospect Tyrek Chambers.  Chambers moved to Arizona via New York this summer where he attended Christ the King High School.  Chambers may be the best overall performer in the state, as evidenced by his play this off-season.  Chambers will run the show with a loaded backcourt that includes another transfer, 5-foot-8 junior guard EJ Jackson.  A native of California, Jackson also enrolled at the school this summer, after attending Serra High School (CA) last season, where he became a You Tube sensation.  Jackson is a big-time ball handler and passer that has drawn rave reviews from his peers.  They will be joined in the backcourt by ultra-athletic 6-foot junior guard Isaiah Wilson, defensive 6-foot senior guard Alijah Gammage.  Also teaming up with the group will be Skyline High School transfer, 6-foot-3 talented junior shooting guard J'Saan Strover.  Strover is still hoping to gain eligibility though by the AIA.

The Thunder frontcourt is just as talented and imposing, and will be led by the play of 6-foot-6 athletic senior wing Wesley Harris, 6-foot-8 senior post Christian Anigwe and 6-foot-7 senior forward Jaden Rollins.

Pinnacle will be the best opposition in the state's 6A Division for Desert Vista.  While the two teams will not face each other during the regular season, they should definitely meet up in a potential 6A state final this season.  Pinnacle is also absolutely loaded with talent from top to bottom, and will feature a young superstar guard in 6-foot-3 sophomore guard Nico Mannion.  Mannion is coming off a terrific freshman season for himself, and will be back to pick up where he left off, especially after a big club season for himself, which included a stellar performance in Italy.

Pinnacle has one of the most talented overall teams in the state as well, as junior guard Trent Brown returns after a big spring and summer where he earned several division-I scholarship offers.  Brown has started as the point position since his freshman season, so he is now a true veteran and the combination of him and Mannion are as good as any in the state, maybe the West.  6-foot-6 senior Mason Johnson (Emory College signee), junior wing Jordan Mains, two-sport star junior guard Spencer Rattler and 6-foot-8 sophomore post Tosh Baker will make Pinnacle very tough to beat this season.  Baker is also a two-sport stud, and while he saw limited action last year on the varsity, he will be one of the most improved players in the state this season, and will give Pinnacle a strong inside presence.

Pinnacle will have a much tougher schedule than Desert Vista during the regular season, so they will definitely face some obstacles, led by match-ups with Mountain Pointe early in the season (11/22), Cesar Chavez (12/5), Mesa (12/8), Clark HS (NV) in the Hoop Hall West (12/9) and, of course, Shadow Mountain (12/15).  Pinnacle will have their work cut out for them this high school season, but, in the end, they will be battle tested as a result, and could win it all.

Sunnyslope High School (pictured) has been rolling for the past two seasons - finishing as the 5A state champion runner-ups in 2016, and winning it all last season (2017).  This will be the third consecutive season for Sunnyslope to get to the state's final game, and they should win it all again.  Head coach Ray Portela and his dedicated coaching staff have done an excellent job of building the team that they have - inserting many of their players into the lineup as freshmen.  It has definitely paid off for the Vikings, as this team has been together for (3) full seasons and will enter their fourth season together.  They will absolutely be tough to beat this high school season.

While Sunnyslope lacks much true size, they destroy opposing teams with their exceptional guard play and overall toughness as a team.  MeWhinney, Abayev and Whitfield are especially tough, while Orozco is as tough a post player to defend as there is in the state, and Kyle Fischer is a flat out mis-match for opposing teams.

Shadow Mountain High School is my top team overall in the state, regardless of class, and has completely dominated the state of Arizona's basketball opposition for numerous years now.  This high school basketball season will, not only, be much of the same, but this season the Matadors will have their most loaded team of all.

Rather than focus on simply another state championship this high school season, Shadow Mountain will be on completely another level, as they set their sights on a national championship.

Junior guards, Jaelen House and Jovan Blacksher are both back to lead this year's talented group.  Now a year older, House and Blacksher absolutely had their way with the state's competition last season, so this year should prove to be even easier for this gifted duo.  Both guard prospects are absolutely special talents for the future, and are both as good of guard prospects as there are in the state right now.  These two young men have been almost unguardable for opposing guards in Arizona and play with superior confidence.

This dynamic backcourt duo won't be relied on so heavily this high school season, as they will be strongly supported by a loading supporting cast of players that includes 6-foot-3 junior guard Jalen Williams and 6-foot-5 gifted sophomore wing Shemar Morrow.

It will be another fun-filled and exciting basketball season, and it all gets underway this week.  Myself and our Arizona Preps' staff will look forward to covering as much of the action as we possibly can this high school season, and look forward to watching it all unfold.  See you soon at a gym near you.