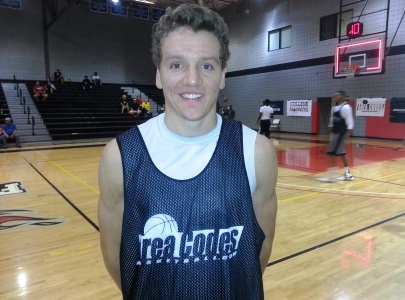 Desert Mountain High School's 6-foot-3 senior guard prospect Will Goff put on a shooting exhibition in the senior game on the night. Goff proved that he is worthy of some serious college recruitment.
Share
Facebook Twitter LinkedIn WhatsApp Pinterest Email

The Area Codes Super 80 Phoenix took place last Friday evening on the campus of Arizona Christian University and included some of the top prospects in the state from each class.  Organized by tournament organizer and local basketball scout Chad Groth (Area Codes), this event is one of my favorite events to attend each year, as it gives me a chance to see some of the top basketball talent in the state in one venue.  The atmosphere is always exciting, as the event takes place the night before the annual ACCAC Junior College Jamboree and, as a result, is attended by many smaller college programs looking to catch a glimpse of top-rated high school talent before the junior college prospects in the state take the floor on Saturday.

Chad Groth did an excellent job this year of getting the college coaches to attend, while also having such scouts as myself, Gerry Freitas (The Hoop Review), Jeff Meadows (The Hoops Report) and Gregg Rosenberg (Arizona Varsity) in attendance to view the action.  The games were also broadcast live on the internet by www.azgamecast.com

While I was unable to attend the first game on the evening, the Frosh/Soph game, which I really wanted to see, I did, however, attend the final 3 games of the evening.  Here are my top performers on the night from the Senior Game – the 2014 Class.  This game lacked many of the top prospects in the class, but proved to be a coming-out-party for numerous senior prospects in the state.

The game was led by the performance of sharp-shooting 6-foot-3 senior guard Will Goff of Desert Mountain High School.  Coming off a very good performance this past spring and summer while playing with the Arizona Power Team Black, Goff continued his strong play with a very strong performance on the evening - one of the best of the event.  Goff knocked down shots from many different angles on the floor, either while open or with a hand in his face from deep.  While I had believed that Goff was a solid player before the event, he proved to be worthy of serious college recruitment.

I caught up with Goff  after his performance and he advised me that he is currently hearing from Boston University, Brown, Texas-Arlington, Weber State and several division-II programs, that he could not name at the time.  Goff told me that he plans to continue to work hard until he lands a nice offer.

Mountain Ridge High School's 6-foot-9 senior post Luke Smith emerged in this game and became one of the best sleeper prospects in the 2014 class overnight.  The lengthy and skilled post prospect showed good footwork, hands and feet.  He also showed good post moves and an ability to knock down the perimeter jump shot.  As a result, Smith is now a worthy college post prospect that should begin to see his college recruitment pick up a great deal this spring.

Chandler High School's 6-foot-1 senior combo-guard prospect Marco Morales also came up big in the game - shooting the basketball at a high clip and continuing his strong play of late.  Morales, who earned Tourney MVP honors in a summer event in the state, is a nice target for a smaller college program looking for immediate offense.  The talented guard prospect is capable of putting up points in a hurry and is instant offense as a result of his unlimited range and quick release.  He will need to play the point position full time in college, and is similar to former Maryvale HS star guard John Pena.

Grand Canyon High School's 6-foot-6 senior forward Joey Bankston proved to be more muscular than he was this summer, and, as a result, played much more athletic in the game, than he might previously.  Bankston has superb athleticism and is capable of playing well above the rim.  He will put up big numbers this season at Grand Canyon HS, so he will gain superior confidence this high school season.  A definite sleeper prospect for the spring.  Currently hearing from numerous division-II programs.

Desert Mountain HS 6-foot senior guard Gino Little turned in his best performance of his young career.  The quick and hard-working guard prospect put the basketball in the hole in the game at a nice rate, and showed that he can play with some of the state's best basketball talent.  Little gained valuable experience this spring and summer on the club circuit, and it showed in this game as Little played at the highest level that I have seen him play.

Deron Kyle, an athletic 6-foot-3 senior guard from Deer Valley HS proved to be a definite player to watch this high school season.  Kyle showed off his superior quickness and athleticism - throwing down a superb dunk in transition in the game.  Kyle is a high-scoring guard that should have a breakout season this year for himself - leading a very competitive team this season.

6-foot-5 senior guard Russ Davis is a good-sized guard prospect with a nice shooting stroke with range.  While Davis doesn't wow you with any part of his game, he is a steady shooter from the wing that is also capable of putting the basketball on the deck and making something happen.  A solid looking prospect that is the younger brother of current college player Blake Davis.