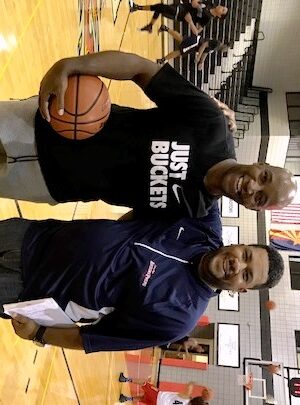 Share
Facebook Twitter LinkedIn WhatsApp Pinterest Email
I had the pleasure of attending the Area Codes Scholar Athlete High Academic Showcase this weekend on the campus of Arizona Christian University.  The event featured some of the state's top prospects.  While I didn't have a roster with me at the event, I did miss some of the top performers.  Here are the top performers that I saw this weekend . . .

The top overall prospects of the event was 7-foot-1 junior post Rick Issanza.  He showed a good feel on protecting the paint defensively. He altered several shots, while getting his hand on a couple as well. He has a slim body type that allows him to get up and down the court with a good pace - able to follow up with a tip dunk or defensive presence.  His foot-work is not bad.  He would really be able to help a program if the program takes the time to develop his offensive skill-set.  He has a soft touch around the rim, including a soft touch on his release from mid range.  He will help a team win games.

A young and skilled player that showed good foot-work offensively. Nathan has a good offensive skillset with a nice touch around the rim - using the back board and also hitting the fade away shot.  He has good court vision and does not force the play or his shot.  Nathan showed a variety of skillsets that will lead to him finding his place on the floor.  Not a great ball handler, but can handle the ball. Defensively held his own.  Will not overwhelm anyone with athleticism, but he is an athletic player.  Almost reminds me of a Boris Diaw (NBA) type.

Colton surprised me because of his size, as he competed against strong athletic guards.  He is really quick guard who can get to the rim and can create for other teammates.  There were a couple plays when I thought he would not be able to get his shot off, but he did. Whether it was him finishing around the rim, doing a reverse layup, using the rim as a defender, breaking down his defender to get a jump shot off, or getting to the paint and drawing defenders to find a teammate, Jett did it all.  I did not see him shoot a lot of 3-pointers.  He seems to pick his shots when he is in rhythm. Defensively is where guards like Colton may potentially be a liability. He has active hands and feet. Slides well laterally. He will be a really good NAIA player.  If he gets taller, I can see him potentially playing higher.

Word is another guard that can be a good point guard for a program. He plays under control with a good change of speed.  He is really good with picking his spots on the floor, and creating his own shot. He finishes well around the basket in traffic and plays with a lot of confidence.  He is a very aggressive guard that continues to attack the defense, but did not shoot every shot.  Defensively, he was an defensive nag - forcing turnovers by applying pressure on the basketball.  He has the potential to grow into a top-rated guard based on his court awareness, including his offensive and defensive skillset.  He can improve on his 3-point shooting, but he is a good mid-range shooter off the dribble.