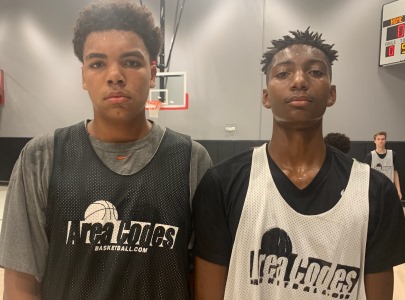 On Sunday, the 7th Annual Area Codes Frosh/Soph Camp took place at the PHHacility. Organized by Tournament organizer Chad Groth, this year's event may have been the best one of it's kind, as there were numerous top performers in the event that showed excellent potential for the future. Led by two-time Camp Most Valuable Player Sadraque Nganga, who would win the award for the second year in a row, the event was absolutely loaded with top-rated talent.

The event was very well organized by Groth, as the games were on time and shortened in a manner that allowed for those in attendance to catch each prospect numerous times on the day, and on different courts. I really enjoyed the action in this year's event, as well as those involved on the staff, which brought a lot of experience to the table for the campers.

Nganga turned in what I thought was his best performance to date. While he is coming off a strong spring and summer performance, watching Sadraque perform against other prospects his age proved just how talented and dominant a prospect that he is, as he absolutely looked like a future NBA performer in the event. Nganga handled the basketball from the point position in the event and looked like an advanced point guard that got other players involved nicely, and made some ridiculous plays off the dribble. Sadraque finished very strong around and above the rim and dunked almost everything, while also showing a superb jump shot with range on his shot. Ran the floor very well and finished strong in transition. Has grown and improved a great deal since I last saw him. Displayed size and and skill level that suggests that he is worthy of a Top 20 national ranking in America's 2022 Class, and is a definite future NBA prospect.

The younger brother of current Arizona State University top-rated sophomore prospect Taeshon Cherry. Recently moved to the state of Arizona. A big-time low post prospect with excellent size and a big body for the future that he is still growing into. A big rebounder that does not mind physical contact, and is difficult to keep off the glass. A good finisher that will only get much better and more effective as he matures physically, and gets more explosive. A very good shooter with a very soft touch from the perimeter, and unlimited range on his shot. Runs the floor well for his size. A capable shotblocker. Has excellent potential over time. A tremendous addition to Arizona's 2022 Class.

Pouncil has unlimited potential as a player, as he is super long and ultra-athletic with excellent bounce off the floor. He is so long that it only suggests that he will continue to grow a great deal over the next few years. He is able to dunk the basketball from almost anywhere near and around the paint, and over defenders as well. An active finisher around the basket and also in transition where he flourishes. An active rebounder that rebounds outside of his area, and is an excellent shotblocker with excellent length and timing. A solid low post scorer, as a result of his length and activity. Still raw offensively, and as he improves and matures physically, look out. Runs the floor like a guard. Has unlimited potential for the future.

Chew is the son of current Grand Canyon University assistant coach Isaac Chew. A do-it-all guard prospect that handles the basketball and makes plays off the dribble and in the open floor. Very good in transition where he is able to finish at a high level with either hand. A playmaker with the basketball in his hands that enjoys gettign the basketball to the open man, but also enjoys creating plays as well. Showed a good perimeter stroke as well, although he still needs to become more consistent from longer ranges. An excellent, lock-down defender that plays passing lanes and is excellent as a one-on-one defender. Has a long wingspan with big, strong hands. Has an excellent body and athletic frame. Reminds me of former Arizona Magic 2006 graduate and standout Harvey Perry of Nevada.

Pierce is a nice talent with good size and athleticism. He makes plays in transition and while slashing to the basket - a good finisher already. Also able to score off the dribble and from mid-range. A good shooter that has range on his shot. A good ball handler for his size. A solid passer. Has very good potential as a player and looks the part. A future excellent sleeper prospect.

Nunn is a big-time shooter and scorer - a deadly combination and rarely seen. Has gotten much quicker off the dribble and has become much more explosive. A very good ball handler that is able to make plays for himself and others off the dribble, and he is a willing passer. Capable of playing both guard positions on the floor, and will be able to over time in college as he matures as well. A very good passer with an excellent feel for the game. A good defender when he decides to lock-up and focus on it. More focus in this area will suit him nicely over time. Plays with a high level of confidence. I really enjoy watching this young man perform.

A long, skilled 2/3 prospect that is very versatile and able to handle the basketball and make plays off the dribble, while also being able to make shots with regularity and from longer ranges on the floor. Dienes has unlimited range on his shot and a quick release. A good ball handler and passer that sees the floor well. Runs the floor very well. A solid finisher that will improve in this area over time, as he matures and gets stronger. An active rebounder. Has nice potential and upside for the future.

Pohl has excellent size at his age, suggesting that he is still growing a great deal - a nice possibility for him as a college prospect. Still raw offensively, but is developing his low-post footwork and his low post moves. A work in progress but he will realize his potential in time. A solid rebounder that keeps plays alive with his ability to rebound on the offensive end. Keeps the ball up high. A capable shotblocker. Runs the floor. Has good upside.

Washington came into this weekend's event with the tag as the best frosh in the state, and he proved it in this event, although Mark Brown is right there with him. A skilled combo-guard prospect with a nice skill level and a superb knack for scoring the basketball almost at will. A left hander, Washington is a playmaker with the basketball in his hands. A slasher and open court player that that thrives in the open floor and enjoys having the basketball in his hands. A big time scorer. A very good defender that plays passing lanes. A very good ball handler and passer. A strong finisher. A big-time scorer. An elite level prospect over time.

Brown is a strong, physical point guard prospect that plays with excellent intensity, and accepts challenges on the court. He plays with a high level of competitiveness and seemed to be looking prove that he is elite on the day. The younger brother of Loyola Marymount standout Brandon Brown, and may have just as bright a future ahead of him. An excellent shot maker with excellent range on his shot, and also an ability to make plays and create off the dribble at will. A strong finisher that has excellent body control and does not mind physical contact. Has nice form on his shot. An excellent ball handler and passer that sees the floor very well. Excellent in transition. A strong penetrator with the ball in his hands and gets to the free-throw line. Pushes the basketball up the floor. A big-time young guard prospect.

Dean is a big-time ball handler, passer and shot-maker for his age. A left-hander, he has a knack for scoring and shooting the basketball with excellent range, and he also makes shots with precision. Plays with a high level of confidence. Has excellent potential for the future with natural maturity, but is fundamentally sound. Pushes the basketball up the floor to the open man. The son of a coach. Has a bright future.

A long, athletic wing prospect with excellent potential for the future. A skilled wing prospect with a good shooting stroke with some range. A good ball handler and passer. An active rebounder. A good shotblocker. Good in transition. A good finisher. As he matures, should develop a great deal. Shares a resemblance physically to Dalen Terry at the same age.