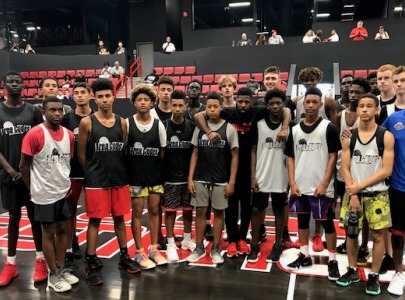 The Area Codes Frosh/Soph Camp took place this past weekend, and, again, featured many of the state's top overall underclassmen prospects from the state of Arizona.  Organized by Tournament Director Chad Groth, the event is always exciting as it gives our staff a good idea of who to watch for in the future.

I was on hand for the full day's events, and came away impressed with numerous prospects in the event.  Here are the top overall young prospects that caught my attention on the day (In no particular order) . . .

A good young post prospect with a good overall skill level.  While he is still a bit raw offensively, he will only continue to improve a great deal over time as he matures physically and naturally, and gets stronger.  Has excellent length on his lengthy body.  A good low post scorer with a sift touch around the paint.  Has good low-post footwork.  Runs the floor well.  An active rebounder and shotblocker.  Has excellent potential for the future.  A nice looking young prospect.

Yat is a big-time young prospect with a nice overall skill level that is advanced and allows him to make plays as a guard or as a small forward.  He has excellent length of body and is rangy, which suggest that he is still growing a great deal and has the potential to really develop over time.  An excellent ball handler and passer with an excellent feel.  A good shooter with range on his shot.  A good finisher.  A good slasher and open court player.  Has an excellent future ahead of him.  Will be transferring to Huntington Prep.

Freeney has impressed me with his play each time I have seen him play, and in every event I have seen him play in.  An advanced guard that handles the ball with the best of them and can create his own shot anytime in the offense, especially because of his pure shooting stroke with unlimited range, which he can get off quite nicely against defensive pressure.  The best guard in the event.  Has a bright future ahead of him and will have a big sophomore season in the state.

Hardt is a big-time shooter of the basketball with unlimited range on his shot and a very quick release.  He is still maturing physically into his young frame, but is beginning to grow into his frame nicely.  Among the best pure shooters in the state.  A good ball handler that is capable of playing both guard positions on the floor, but is at his best while shooting the basketball.  A solid driver and finisher with a nice left-handed shooting stroke, which allows him to make plays in an unorthodox manner, and with a variety of floaters.  A good passer.  A solid rebounder.  Solid defender.  Received a big division-I offer from Idaho State University after the event.

Cain is a very skilled prospect that has excellent versatility as a player and is able to play multiple positions on the floor.  He is a very good ball handler for his size and can create scoring opportunities for himself and others off the dribble.  Has good length of body and big hands and feet - suggesting that he is still growing a great deal.  A good shooter with some range, but at his best from mid-range and around the basket.  An active rebounder.  A good shotblocker.  Good defender that plays with a good motor and high energy.  Gets a lot done.  Has a bright future ahead of him.

An athletic and talented guard prospect with a nice frame already.  A good slasher and open court player.  A good mid-range shooter.  An active player that plays with a good motor.  An active defender with quick hands and feet.  An active rebounder.  A solid ball handler.  OK passer.  Has good potential.

Garcia made the most out of this event and raised his stock with his performance in the event.  A very skilled guard prospect with an excellent shooting stroke with unlimited range and a quick release on his shot.  A good ball handler and passer that sees the floor.  Plays with good overall confidence.  Very thin physically, and will need to add serious size to his thin frame but should mature a great deal over time.  An active rebounder.  Solid defender.

Fornerette is a skilled guard prospect with a good feel for the game and a crafty approach to the game.  A good penetrator and finisher in the lane.  Good in the open floor.  A very good ball handler and passer - sees the floor.  Pushes the ball up the floor to the open man.  A good shooter from mid-range.  A good defender with good lateral quickness.  A solid guard prospect that is fundamentally sound.

Nganga is new to the United States and also the state of Arizona, after moving from Angola this summer.  Immediately, Nganga became a national prospect with glaring promise for the future.  Nganga is a big-time future prospect with a serious skillset and nice length and size already at such a young age.  He has an advanced skillset that allows him to play as a guard, and also play very effectively around the paint.  A prospect with loads of potential for the future and among the elite overall prospects in America's 2022 Class.  A Nike rep was in attendance for the event just to follow this young man's performance.

A strong low-post prospect with a superb body and unique athleticism for such a young age.  His body and face look much older than as a freshman, and he is an excellent athlete and finisher for such a young prospect.  A big-time rebounder and finisher around the basket and in the open floor.  A good low post scorer with good footwork.  A good shotblocker.  He is a big-time prospect for the future, especially if he can continue to develop as he should over the next few years.  This young man is a mid-major prospect already, so I will be keeping a close eye on him to see where he lands at for school, and watching him closely over the next few years.

Pohl is a bigger power forward prospect with very good size at an early age and a nice overall skillset and approach to the game.  Pohl can play inside and out, and is most impressive in his ability to catch, turn and face the basket, where he is able to make shots with a soft touch, and also make a strong move toward the basket.  While he is still raw offensively, he has the potential to develop a great deal over time.  A good rebounder with solid overall toughness.  Does not mind physical contact.  Runs the floor well.  A solid finisher around the basket.

Dienes has improved a great deal since I last saw him perform, as he has grown several inches and gotten much stronger physically.  He has a superb shooting stroke with unlimited range on his shot and a quick release.  Knocked down numerous three-pointers in the event, and amidst defensive pressure.  Has a good overall skill level and is fundamentally sound.  A good ball handler and passer that sees the floor.  Runs the floor well.  Still very thin physically and will need to add much more physical size to maximize his potential over time, but he is still growing a great deal and should blossom over time.  A solid rebounder and defender.  Has a bright future.  An excellent student.

Nunn has the South Mountain program looking to get back to their winning ways, as Nunn will team up in the future with Zay Freeney to give the Jaguars one of the state's top young backcourts.  Nunn is a skilled guard prospect that is capable of playing both guard positions, although he likes to score much more at this juncture in his young career.  A very good scorer that can make shots from almost anywhere on the floor.  Capable of scoring from the stand-still position or while on the move.  A very good handler that is difficult to guard one-on-one.  An OK passer.  A solid finisher.  An OK defender that needs to focus more defensively.  Has excellent potential for the future as a scorer.

Tamboura is a physical specimen for such a young age.  He is still very raw offensively, but his physical size and strength for his young age make him almost impossible to stop for prospects his age.  An active rebounder and defender.  A capable shooter that lacks consistency on his jump shot.  An OK ball handler and passer.  Runs the floor hard.  Has a bright future though as he matures and develops his overall fundamental skillset.