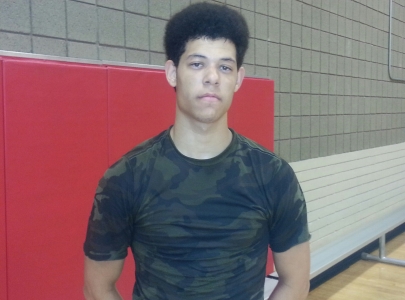 Arcadia High School's hard-working and skilled 6-foot-4 senior wing prospect Avonte Nelms has emerged as a very good looking prospect for Arizona's 2015 class.  While the class is still developing in the minds of college coaches across the country, Nelms is now regarded as one of the better wing prospects in the group.

Nelms moved to the state of Arizona via the state of Colorado last season, and immediately became one of the top overall performers for Arcadia HS and head coach Stephen Danford and his staff.  Nelms was consistent all season long - averaging 11.7 points and 4.3 rebounds per/game.  Nelms was the team's third leading scorer last season.  This season, Nelms will join forces with senior forward Connor Nichols to make one of the state's best one, two punches.  Both prospects will lead the way for the Titans each night.

Look for Nelms to raise his overall numbers a great deal this high school season, as this young man has worked very hard on his game and body over the last year.  Nelms has dedicated himself through working daily with terrific, former high school head coach Aaron Windler, while playing this past spring and summer with the Arizona Aces club basketball program.  The program has some major success this club season - winning several club events and finishing strong in each tournament.

While working with Windler and the Aces' staff, Nelms has refined his overall play - adding a better inside, outside repetoire, while also becoming more assertive in his overall approach to the game.  Nelms has improved the consistency on his jump shot and also his range, while also becoming quicker off the dribble.  He is a good finisher inside the paint and also can create for himself off the dribble - making him difficult to defend for opposing defenders.  Nelms has the size and strength to post-up smaller defenders, and the skillset to shoot over smaller defenders on the wing.  As he embraces this fact, he will really develop at the collegiate level into a nice asset.

Nelms has also become a two-way player, as it is referred to these days.  He takes pride on the defensive end in stopping his opponent - something that was a must while playing for Aaron Windler this club season.  As a result, Nelms has improved his lateral quickness and overall approach towards defensive principles.

Nelms should see his future at the shooting guard or small forward positions in college.  While he will definitely see some time at Arcadia this season in the post as well, as a result of their sheer lack of size, Nelms has definitely worked hard on his skills to play inside and out - something that will benefit him nicely over time.

Currently, Nelms is hearing from many different smaller college programs for his services, so it will be very interesting to see where he lands at for college.  He has the ability to play for a smaller division-I program, but he also could land at a strong division-II program as well.  Either would be a good fit for this aspiring talent.