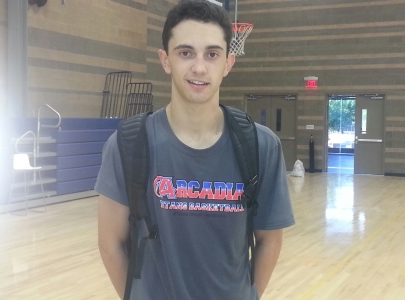 One of the top prospects in Arizona's 2015 class that many still do not know about is Arcadia High School's gifted 6-foot-5 senior wing prospect Connor Nichols.  Nichols is coming off an excellent junior season and also a good performance on the spring and summer club circuit.  He now has his sights set on a strong senior season where he will look to work hard to lead his Arcadia Titans to a state title, while also looking to boost his college recruitment.

Nichols is one of the best prospects in Arizona's underrated 2015 class.  He possesses a nice, fluid approach to the game on the offensive end, as he has a variety of offensive skillsets that set him apart from many high school prospects in the state.  Nichols' ability to make plays on the offensive end with or without the basketball in his hands are attractive attributes that he has, and when he has the basketball he has a nice approach to the game that allows him to make plays off the dribble or from the wing position.

Last season, as a junior, Nichols averaged strong numbers on the season - 15.4 points, 2.7 assists and 3.1 rebounds.  Each of these numbers should improve a great deal this high school season, as he looks to lead a strong returning team in the state's Division-II Class.

Nichols stands almost 6-6 in heigth and has a long, rangy frame which allows him to play inside and out, although he is definitely a wing prospect that enjoys the wing position on the floor.  He also has very good post skills when needed, allowing him to score over smaller defenders in the post area or from the short corner.  Nichols has a good handle of the basketball and a strong jab step, which allows him to create space for himself on his  shot.  The range on his shot is nice and he has a textbook shooting form on his stroke.    He still needs to get mcuh stronger physically and add some more explosiveness to become a better finisher at the rim against better competition.  Over time he should mature nicely into a much better prospect.

I will continue to watch Connor develop as a college prospect this high school season, and also see how well he and his Arcadia team perform in the state's tough Division-II Class.  Their match-up with defending state champion Shadow Mountain HS will be enjoyable to watch this season.