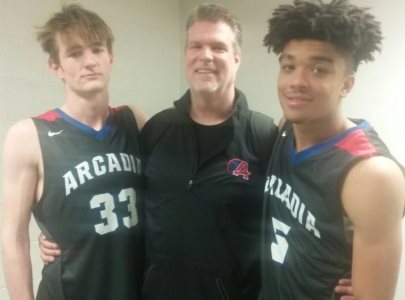 Arizona Preps made the long drive to Surprise, Arizona on Tuesday evening to catch would looked to be a very good contest between 5A Division rivals, Arcadia High School and host Shadow Ridge.  With both teams looking to gain momentum for the second half of the high school season, and with loads of talent on the floor, it was thought to be an exciting match-up.  While the game would still be exciting, it would quickly become a lopsided contest fast.

Arcadia (12-5) was coming off a loss to Mesa in the McClintock Holiday Shootout over the holidays, before defeating McClintock HS in their final game.  Head coach Stephen Danford and his staff are looking to make a big run for the 5A state playoffs this high school season, so Tuesday night's contest would be an important one for them to get momentum going for a late season push.  The team is well coached and has a nice compliment of shooters and skilled performers.

Shadow Ridge (12-5) is a very talented team, although still very young.  They would have their hands full with a veteran Arcadia team at home, on a night that was filled with pouring rain and flooding outside the gymnasium

Arcadia would get it going quickly in the contest, as they would look to put Shadow Ridge away early.  After a steal and a layup in the open floor by big, 6-foot-3 senior guard Jalin Fleming in the first two minutes of the game, Arcadia would jump out to a fast 8-0 lead over Shadow Ridge.

After a quick timeout by the Shadow Ridge coaching staff, Arcadia would continue their strong play - jumping out to a big 19-7 lead after a three-pointer from the corner by 6-foot-3 senior guard L. Ashworth.  Arcadia would cruise to a 21-7 lead after the first period.

Arcadia would look as though they got some much needed rest and focus on the winter break, because the team's engine was running strong on gas and oil.  A three-pointer by 6-foot-5 senior do-it-all forward Aiden Weber, would give Arcadia a big 26-7 lead with 7 minutes remaining in the half.  After another steal and layup in the open floor by Fleming, Arcadia would burst to a big 30-7 lead with 4 minutes left to play in the first half.

Arcadia would cruise to a 37 to 14 lead by halftime - a huge 23-point halftime margin.

The first half would become too much for the Shadow Ridge team to overcome in the second half.  After a strong tip-dunk early in the second half by Aiden Weber, after a missed shot by a teammate, Arcadia would take a big 42-16 lead in the contest, and would not look back from there.  Arcadia would then finish off the big 64-48 road win on a night when the weather was miserable, and so was the shooting of the host team.

Arcadia will now host Notre Dame on Thursday (1/11), and then travel to Chaparral HS on Friday (1/12), in what should be a very important match-up for both teams.

Scouting Notes:  Arcadia's 6-foot-5 senior forward Aiden Weber (pictured left) is a very nice sleeper prospect in Arizona's 2018 class.  Weber led the state last season with double-doubles as a junior, and he has returned for his senior season doing much of the same thing.  Weber is a versatile forward prospect with a strong, athletic frame, which allows him to play inside and out.  He is a strong finisher around the basket and is very tough to keep off the glass, and is a true mis-match for opposing teams, as he does not have a true position on the floor.