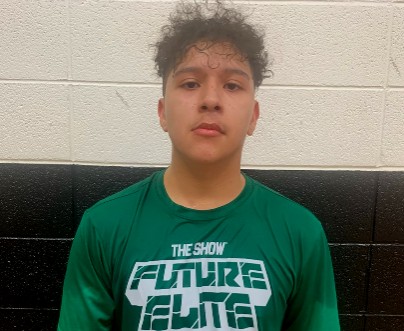 After observing last weekend's The SHOW Future Elite Summer League, an excellent showcase of the state of Arizona's top underclassmen prospects in the state, it was obvious that Peoria High School's gifted 6-foot-1 rising sophomore guard Andrew Camacho was a force to be reckoned with among his fellow young prospects. With many of the state's elite young prospects in participation for the league, Camacho proved in the first weekend of action just how good he is and will become.

Camacho is a well known top-rated young prospect in basketball circles in the state of Arizona, as he has torched his competition for years in the valley. This well-advanced young guard prospect is simply different, and plays with reckless abandon on the court. He is a very difficult match-up for young opposing guards, as he has very good size already and excellent physical strength and quickness, which make him very difficult to defend - especially when he is pushing the basketball hard downhill towards the basket.

Last weekend, Camacho got off to an excellent start in the league, as he did absolutely what he wanted to do off the dribble, and made plays at a high level on both ends of the court. He also made a game-winning shot for his team at the buzzer in his first game, which electrified the crowd in attendance. After the first weekend of the league, Camacho leads all scorers in the league with a 29 point scoring average.

Camacho is also coming off an excellent freshman season for himself, where he averaged impressive numbers on a very talented Peoria HS team that finished with a 26-4 overall record on the season, and just missed winning the 4A State Title - falling in overtime (54-48) to Salpointe Catholic HS. Camacho was a major catalyst for Peoria as a mere freshman - averaging 14.7 points, 3 rebounds and 3 assists per/game.

Camacho is among the state's top overall prospects, regardless of class or position. He has excellent size, strength and toughness, and plays hard and with an excellent motor. He is much quicker and explosive than he looks, and he simply gets a lot done on the basketball court - playing with a chip on his shoulder at all times. He looks like a player that wants to be the best, and believes he is the best. A rare quality. He is a strong ball handler that is able to get to where he wants to on the floor, and relishes physical contact. A strong driver of the basketball and also a strong finisher that gets to the free throw line quite often.

He is an excellent shooter already with very good range on his shot, and has an advanced fundamental approach to the game. He can score off the dribble or catching and shooting. I really like his mid-range ability to score and make plays. As he continues to mature physically over the next (3) years, he should really have his way with defenders, as he learns how to play even more with pace.

Camacho will receive his major share of college recruitment over time. Especially as college coaches begin to become aware of him and his promise as a college prospect, he should receive loads of Division-I college recruitment. I have enjoyed watching him play the game already, and look forward to bigger things from him in the near future.