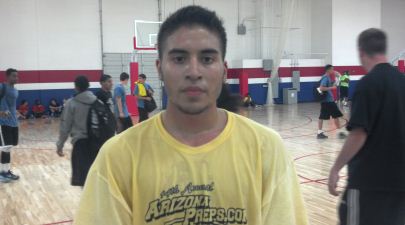 Nogales High School has one of the state's best basketball programs and has been very success over the years - playing a very fundamental brand of basketball that has led to many wins and a state championship in 2011.  Gone are household names Cesar Solis and Joseph Monreal, but picking up where they left off, and then some, has been 6-foot-1 senior point guard Andres Marquez.

Marquez is a very well known prospect by other top performing basketball prospects around the state of Arizona, as he has competed against the state's best for some time, and is no stranger to being a top performer each time he has matched up with another top player at his position.

Marquez proved just how good he is and can be in the recent Arizona Preps Fall Showcase, where he was among the top overall performers in the event.  Marquez exploded in the tournament and was selected as the Surprirse Performer from the weekend.  The play of Marquez was enough to garner the attention of numerous college scouts and also high school coaches at the event.

"He is a player," said Maryvale High School head coach Sebastion Payton, who coached Marquez in the Fall Showcase.  "I didn't know who he was before th event, but he definitely got my attention.  He is a serious ball player - a nice college prospect."

While living in Nogales, many basketball enthusiasts across the state have not yet seen him perform, but he is definitely worthy of serious recruiting attention.

Marquez is an athletically gifted performer that plays with excellent quickness and aggression on the basketball court.  He likes to have the basketball in his hands and makes plays for himself and others at a high rate.  He is a strong ball-handler with a very good feel for the game and an ability to get anywhere he wants to on the floor.  Marquez is an excellent shooter with range and has a nice mid-rnage game as well, making him difficult to defend for opposing guards.

Marquez pushes the basketball up the floor as often as he can, and sees the floor very well - looking for the open teammate as often as he can, putting pressure on opposing defenses.  He is also a very good defneder with good lateral quickness and quick hands.  Marquez is a terrific overall athlete and it shows in his ability to play the game.

Marquez is a capable combo-guard prospect since he is an excellent scorer, but will look to play the point guard position full-time at the collegiate level.

Look for Marquez to lead his Nogales High School prgram to another strong finish in the state playoffs this season, and begin to generate some serious college interest this spring.