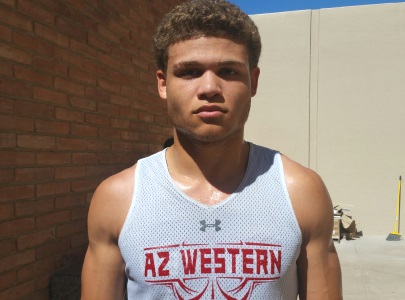 One of the elite freshman prospects in the Arizona Community College Athletic Conference (ACCAC) this past junior college season was Arizona Western's 6-foot-6, 235-pound freshman forward Andre Jones.  Jones should become one prospect that will be highly sought after by numerous college coaches this summer, and next season.

Recently, Jones received a scholarship offer from a program in the Southland Conference, as Lamar University extended an offer to the athletic forward prospect.

A native of Indianapolis, Indiana, Jones had a very good freshman season for Arizona Western head coach Charles Harral and his staff - averaging 13.5 points and 5.8 rebounds per/game, while shooting 44.7% from the field.  Jones helped lead Arizona Western to a 26-7 overall record on the season and a 17-5 record in the conference.

Jones is a very strong, well-built physical specimen with a a nice frame for the collegiate level and very good athleticism.  He doesn't have a true position on the floor, and plays as a combo-forward for Arizona Western.  His best position should be as a small forward over time - a position that he will need to embrace and develop over the next year to prepare for the division-I level.

Jones is a good mid-range shooter and a good scorer around the basket, but still needs to add consistency to his shot from longer ranges.  He is at his best when attacking the basket and moving without the basketball, where he is difficult to keep off the glass and can finish strong at the rim.  Plays above the rim and is an excellent finisher.  He is an OK ball handler and passer, and will need to continue to focus on these two areas of his game to develop and progress for the future, but his sheer athleticism and physical strength are glaring attributes that make him an attractive prospect.

I look for Jones to continue to gain much more recruiting interest over the next 6 - 8 months, as he will be among the top returning prospects next fall for Arizona Western and the ACCAC.

I will continue to follow his college recruitment closely, and bring you recruiting updates as they continue to develop.