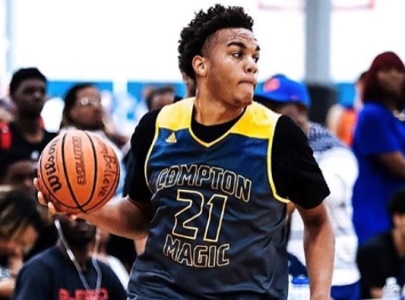 Hillcrest Prep 6-foot-7 prep forward Andre Harris has not played for his Hillcrest Prep program since before the Hoop Hall West event in Arizona earlier this month, and so this weekend Harris decided to pull the trigger on his college recruitment - giving a verbal pledge to a program in the Atlantic-10 Conference.

Harris's decision came as a surprise in December, after it was thought that he would wait until the spring to make his college decision. Harris gave a call to Duquesne University assistant coach Charles Thomas on Sunday evening, and gave his commitment to the program. Thomas had recruited Harris very hard for some time, and was able to reel in a commitment from Harris.

Harris earned many offers from strong play on the spring and summer club circuit, while traveling with the California-based Compton Magic (CA) program. The team was absolutely loaded with talent and Harris was a big piece for the heavily Adidas-sponsored national program. On the team, Harris teammed up with fellow Hillcrest Prep star 6-foot-7 senior guard Dalen Terry (University of Arizona signee) - bringing some Arizona flavor to the California-based team, which won many games against stiff competition. While the team was featured in many big games this past club season, Harris came up big when he needed to and gained serious respect for his efforts from fellow and opposing players.

Harris is a nice overall talent, and with continued hard work, he could contribute right away at the collegiate level, as a result of his toughness and college-ready frame.

Harris changed schools from Red Mountain High School to Bella Vista Prep, before then moving again to Hillcrest Prep last season (2018-2019), after the season had already began. After being unhappy with his situation at Bella Vista, Harris excelled at Hillcrest Prep.

There are very few, if any, other players in the state like Harris.  This young man possesses excellent physical size on a strong frame that also has very good length of body. He has excellent versatility and is able to play several different positions on the floor, which makes him very difficult to defend for opposing teams and players.  He is a mis-match consistently for teams, as he is physically bigger and stronger than most post opposition he faces. He also has the mobility to also play on the perimeter, although he is at his best around the paint.

Congratulations to Harris and his family from our Arizona Preps' staff on this commitment.

Arizona Hoop Review Scouting Report:  Harris is a wide-body low post player that likes to score around the basket and from mid-range.  He has solid low post skills and a nice ability to use his body to draw contact and finish around the paint.  He is also able to step outside and shoot the basketball out to three-point distance, although he still needs to add more consistency to his shot.  Currently, he is a good mid-range shooter with a soft touch.  I like Harris physically, as he has very broad shoulders and excellent physical strength.  He can score inside and out and is difficult to keep off the glass, when he makes up his mind to fight for rebounds.  He is a bit of a tweener for the college level, but such players like him often have very good success in college - he will just need to pick the right college program for himself, that will be a good fit for his talent. A strong rebounder and finisher around the basket.  Runs the floor.  A solid passer.  A good shotblocker.  A solid low-post defender, but needs more focus on the defensive end to maximize his potential as a player.  Has some upside.