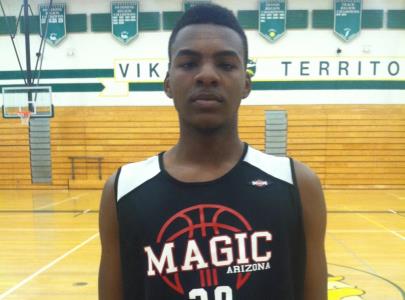 While the majority of top-rated talent in Arizona's superb 2014 class is off the books, already having signed with division-I college programs, there are still a few top-rated prospects still hanging around this spring.  The top-rated prospect still available this spring among Arizona's elite 2014 prospects is Westview High School's talented 6-foot-9 senior post Andre Adams.  Considered as the top available unsigned post prospect in the country by many national scouting services and media outlets across the country, Adams is still considering his options for the future.

Adams is a tremendous talent normally would not be in this position.  As a national Top 100 college prospect in America's 2014 class, Adams has had his share college scholarship offers from high-major division-I college programs across the country.  Finding a college program is no issue for Adams.  Rather becoming academically eligible and clearing the NCAA Clearinghouse, which Adams has worked very hard over the past year to complete.

According to Adams' club coaches, Kenny Mullins and Gino Crump with the Arizona Magic Elite, Adams is very close.  After posting good grades this school year, Adams has raised his overall core GPA grade average, and now seems to just need a test score from the SAT or ACT college entrance examination to become eligible.  Mullins and Crump believe that Adams could still receive a qualifying test score late this spring or during the summer months.  If Adams can qualify, look out, as he would become one of the very hottest prospects in the country overnight.  If he does not qualify, Adams will look at the possibility of attending a prep school or a junior college program next fall.

An almost unknown prospect before the beginning of the 2012 AAU/club season, Adams emerged as one of the elite young prospects in the West after a strong spring and summer two years ago.  Since then, Adams has tried to maintain his national success and attention. The son of former NBA star guard Lewis Lloyd (Houston Rockets), Adams has a big-time future ahead of him, as he is very long and rangy and still growing a great deal.  Adams’ serious length and versatility as a player are very intriguing for a post prospect and he is still growing into his body.

Unlike many top-rated prospects who, often times, peak early, Adams’ best years are well ahead of him.  Possessing a thin, long frame, Adams has a left-handed shooting stroke and is capable of playing either with his back to the basket or while facing the basket out to three-point distance.  He can put the basketball on the floor and get to the basket and finish strong, while also being an active rebounder and shotblocker that recovers quickly, and with excellent timing.  Adams is currently at his best as a defensive stopper around the paint and has a striking resemblance as a player to former North HS and Arizona State product Tommie Smith.

Adams still needs a lot of development as a player, but has the potential to become a serious college player over time.  I will continue to follow Adams' story very closely this spring and summer, and bring you any updates as they continue to develop.