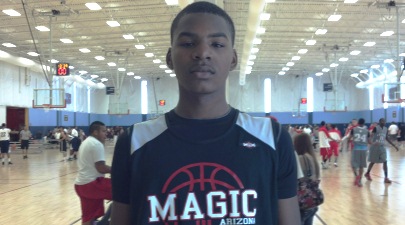 With many coaches looking to catch a glimpse of some lesser known high-major division-I talent in this weekend's event, Westview High School's 6-foot-8 sophomore post Andre Adams rose to the occassion.  An almost unknown prospect before this weekend's event, Adams would emerge this wekeend as one of the top up-and-coming young prospects in the West.

A young but very talented prospect, Adams was part of a very talented Westview High School basketball team this past season that finished with a strong 23-7 overall record on the season in the Division-I Class.  Still a very young and developing talent, Adams averaged 4.8 points and 6.7 rebounds per/game this season on a well-balanced Westview team.  Since the high school season, Adams has come into his own.

Playing on the 16U club circuit and still only being 15 years of age, Adams has blossomed quickly and has a tremendous upside for the future.

The son of former NBA star guard Lewis Lloyd (Houston Rockets), Adams has a big-time future ahead of him, as he is very long and rangy and still growing a great deal.  Adams' serious length and versatility as a player are very intriguing for a young prospect and he is just beginning to grow into his body.

"He will be big-time,' said Gino Crump, Adams' club coach with the Arizona Magic Elite 16U team.   "He is still learning the game but has already come a long way.  He may be the best prospect in the class when it is all said and done."

Adams helped lead his club team this weekend to an undefeated record before reaching the tournament's quarterfinals and falling by two points to the Double Pump Elite (CA) in a great game.  Adams did all he could in helping his team keep close in the loss - rebounding, blocking shots and scoring around the paint.  As a result of Adams' effort this weekend, he received a lot of attention from college coaches, scouts and media in attendance as a future high-major division-I recruit.

Unlike many young prospects who, many times, peak early, Adams' best years are well ahead of him.  Possessing a thin, long frame, Adams has a left-handed shooting stroke and is capable of playing either with his back to the basket or while facing the basket out to three-point distance.  He can put the basketball on the floor and get to the basket and finish strong, while also being an active rebounder and shotblocker that recovers quickly, and with excellent timing.  Adams is currently at his best as a defensive stopper around the paint and has a striking resemblance as a player to former North HS and Arizona State product Tommie Smith.

Look for Adams to develop into another elite prospect in Arizona's already very loaded 2014 class.  This weekend's performance is just the beginning to an excellent career from this young prospect.